Uncrewed or unmanned marine vehicles are robotic vehicles that can travel either on the surface of or under the water without any human operators on board. They may be remotely controlled, operate autonomously, or function with a mix of the two.

Unmanned surface vessels (USVs) are used for a variety of marine and maritime operations, including military ISR (intelligence, surveillance and reconnaissance), mapping, scientific research, and environmental monitoring. They may be unique designs, or may be based on manned vessels that have been retrofitted to allow remote operation.

USVs may be equipped with a range of different sensors and payloads, including radar, sonar, chemical sensors, water samplers, and armaments. Autonomous USVs, also known as ASVs (autonomous surface vessels), may have artificial intelligence capabilities that aid them in autonomous navigation and collision avoidance. 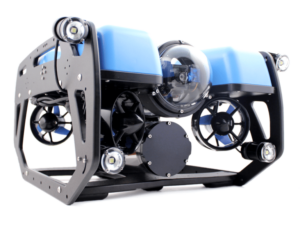 Remotely operated vehicles (ROV) are directly remotely controlled via a tether from the shore or a support vessel, which is required due to the difficulty of propagating radio waves underwater. The tether provides power as well as communications between the vehicle and operator.

ROVs are used for both military and civilian applications, including pipeline and offshore platform inspection, mine countermeasures, and environmental monitoring.

Autonomous uncrewed vehicles (AUV) can operate without direct real-time control, and may be capable of undertaking long-endurance missions of many months. They may follow a series of pre-programmed set waypoints, or may use artificial intelligence to operate with a greater degree of freedom in their decision-making.

Most AUVs are battery-powered and use thrusters for propulsion. Some, known as underwater gliders, use changes in buoyancy to vary their depth, and are usually used for highly regular sampling or monitoring missions. Other AUV applications include anti-submarine warfare, seabed mapping, and oil and gas surveying.