Autonomous vessels, including autonomous surface vessels (ASVs) and autonomous underwater vehicles (AUVs), are capable of operating without direct input from humans, monitoring their own statuses and making decisions based on changes in their environment. 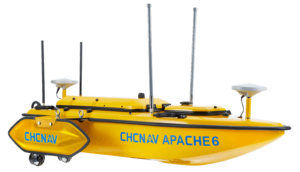 Autonomous USVs, also known as ASVs (autonomous surface vessels), are being developed for a variety of applications, including cargo shipping, environmental research and border patrolling. In order to operate successfully and safely, maritime autonomous surface ships must be equipped with robust navigation and collision avoidance technologies.

Autonomous vessels are equipped with a range of sensors that allow them to gather information on their surroundings, including visible and thermal cameras, radar, and LiDAR. The data is processed by sensor fusion algorithms, and decisions are made based not only on these outputs but also on other sources of information such as weather reports and AIS (automatic identification system). Decision algorithms, which may be powered by artificial intelligence (AI), may also need to comply with maritime regulations such as COLREGS.

This also means that AUVs must rely on navigation methods other than GPS/GNSS, as constantly surfacing to get a satellite fix would be highly inefficient. GNSS data is supplemented by other technologies such as marine inertial navigation systems (INS) and Doppler Velocity Logs (DVL).

AUVs are used for a wide range of civilian, commercial and military applications, These include seafloor mapping, oil and gas construction, oceanography, marine research, military ISR (intelligence, surveillance, and reconnaissance) and mine countermeasures (MCM).