Top LiDAR sensor manufacturers include: Teledyne Optech, Riegl, Yellowscan and PolyExplore. Their LiDAR sensor systems are designed for use on drone platforms for aerial mapping, surveys and inspections

What is LiDAR Technology and how does it work? 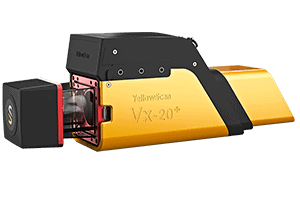 Lidar, or LiDAR (a portmanteau of light and radar, also interpreted as an acronym for “Light Detection And Ranging”), is a distance-measuring and imaging technology that uses pulses of light in the form of a laser beam from the ultraviolet, visible and infrared portions of the electromagnetic spectrum.

These pulses of light are reflected, typically via backscattering, by the object under measurement. The LiDAR sensor measures the time taken for the pulse reflection to return and can thus calculate the distance from the object.

There are two general methods of detection – incoherent or direct energy detection, which is used for amplitude measurements, and coherent detection, for phase-sensitive measurements. LiDAR can be used to scan a wide variety of materials and the wavelength of the emitted laser is varied to suit the target.

How LiDAR Systems are used on Drones and Airborne Unmanned Vehicles 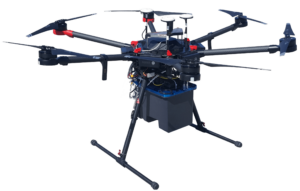 When combined with a GPS receiver, inertial measurement unit and onboard computer, a LiDAR sensor can be installed on a drone or UAV and used to scan a large area, with tens of thousands of points per second being measured.

The reflection time interval data is post-processed, converted to distance and correlated with data from the GPS receiver and IMU, which provide highly accurate information on the unmanned aircraft’s position and attitude respectively. The resulting 3D point cloud can be used to build up a detailed image of the surveyed area and provide vital insights to decision-makers. 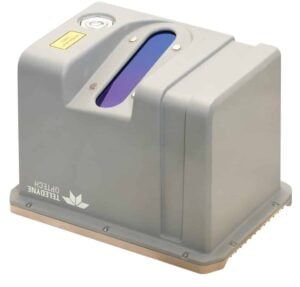 LiDAR technology has many applications and is especially ideal when high-accuracy measurements are required, or when the area under survey or inspection is dangerous or physically difficult to reach. Drone LiDAR mapping provides many additional benefits, including reduced mission time and manpower requirements, and the ability to obtain quicker results by gathering all required data in a single pass.

In addition to mapping, UAVs and other unmanned systems may also utilise LiDAR technology for obstacle detection and collision avoidance, and for safe automatic landing. LiDAR is one of the leading technologies currently being utilised in the development of autonomous driving vehicles and self-driving cars. 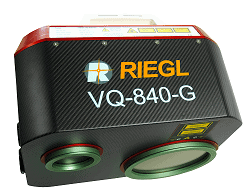 Bathymetric LiDAR, which is used for hydrographic applications to survey coastlines and shallow waters, operates on a different wavelength to topographic LiDAR, which uses laser pulses that are absorbed too rapidly by water to be of use. Bathymetric LiDAR sensors output laser light using the green wavelength of 532 nm, requiring a higher power which means a lower pulse rate and fewer measurements per second.

UAV LiDAR bathymetry is used in coastal surveys to characterise the land and seafloor, for environmental monitoring and coastal reef mapping, to gather data for flood simulations, and in a wide variety of other applications.

MEMS (micro-electromechanical system) LiDAR technologies are currently being developed for use in autonomous driving as well as unmanned systems such as UGVS and UAVs. These use tiny MEMS mirrors, etched onto silicon wafers, to accurately deflect the laser beam. The MEMS mirror arrays can be used to replace traditional beam deflection units, which are usually spinning devices that are mechanically complex and prone to friction and wear.

LiDAR is a distance-measuring and imaging technology that uses pulses of light from a laser beam utilising the ultraviolet, visible or infrared portions of the electromagnetic spectrum.

How does LiDAR technology work?

Pulses of light from an ultraviolet, visible or infrared laser beam are reflected, typically via backscattering, by an object under measurement. The LiDAR sensor measures the time taken between emission of the pulse and the detection of the pulse reflection, and can thus calculate the distance from the object.

What does LiDAR stand for?

What is LiDAR used for?

LiDAR mapping and surveying is used to gather accurate, precise data on both manmade and natural environments. Applications include cartography, agriculture, forestry, meteorology, mining, environmental management, inspection of utility lines and transport networks, and many other fields.

LiDAR is also used in UAVs and other unmanned systems for obstacle detection, collision avoidance and safe automatic landing. It is currently one of the leading technologies being utilised in the development of autonomous driving vehicles and self-driving cars.

What is LiDAR mapping?

LiDAR using green wavelength lasers provides maximum penetration of water – many other wavelengths will be rapidly absorbed within a few centimetres of water depth. Bathymetric LiDAR sensors can be used to measure river beds, the seafloor and other underwater features.

How does doppler LiDAR work?

Due to the relatively short wavelengths, LiDAR pulses are unable to penetrate through most thicknesses of cloud cover.

What is airborne LiDAR?

An airborne LiDAR system consists of one or more LiDAR sensors mounted on a fixed-wing or rotary manned or unmanned aircraft.

What is a LiDAR survey?

LiDAR surveys are carried out with manned or unmanned aircraft and gather data that can be used to create digital terrain or elevation models. Depths of water features can also be measured.

How accurate is LiDAR mapping?

The accuracy of LiDAR mapping depends on the equipment used, the distance to the target, post-processing of the data and many other factors. It is possible to achieve sub-centimetre accuracy.

What is the difference between LiDAR and Radar?