Heavy lift drones are unmanned aircraft with the capability to carry and operate heavy equipment such as cameras, thermal and LiDAR sensors as well as military, commercial and agricultural payloads.

The nature of the tasks required of these drones, such as surveillance, filming, surveying and inspection, lend themselves to multirotor drones with VTOL and hover-in-place capabilities. Multirotors such as heavy lift quadcopters, heavy lift hexacopters and octocopters feature technology that is simple to assemble and deploy, alongside large payload capacities and extended flight times. Plug-and-play payload options may include vision systems that enable both day and night flight.

Many drones designed to lift heavy weights can be quickly reconfigured to perform multiple roles. 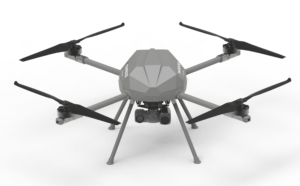 Commercial uses for heavy lift multirotors include inspection and surveying as well as professional mapping applications and aerial cinematography. Capable of safely and steadily carrying professional cameras and imaging equipment, these types of drones are used extensively by filmmakers and broadcasters to deliver impressive footage in all weather conditions. 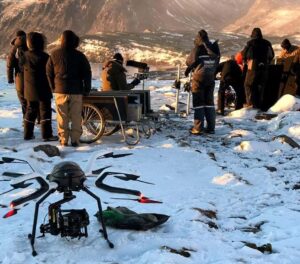 Heavy payload industrial drones are also used for solar and wind farm inspection and security details, as well as by rail networks and communication providers.

Heavy payload drones are used extensively as agricultural drones, saving time and money by undertaking crop spraying and monitoring, as well as assisting in harvest planning and using hyperspectral cameras to detect damage to crops, soil deficiencies and other factors impacting growth.

Drones capable of carrying heavy loads are becoming increasingly popular as cargo drones, used to deliver medical and healthcare supplies such as medicines, blood and vaccines as well as emergency equipment and supplies during search and rescue and disaster relief operations. Heavy lift delivery drones can also be used to transport goods and mail to and from remote communities, being both faster and less expensive than transitional modes of transportation.

Gimbals for heavy lift drones are designed to accommodate a wide range of cameras, sensors and payloads, providing seamless operations alongside quick swap functionality. Designed to facilitate the practical uses these types of drone are suited to, such as survey and inspection, stabilized drone gimbals are crucial for seamless filming, often featuring durable, robust construction with secure data link integration and multiple camera and imaging payloads.