UKRSPECSYSTEMS is a provider of flexible, affordable Unmanned Aerial Vehicles (UAV) for both military and commercial applications. We provide both fixed-wing and multirotor drones, in addition to state-of-the-art support equipment such as ground control stations and gyro-stabilized gimbals.

The PD-2 UAS is a versatile modular UAV platform that is designed to fit the needs of a wide variety of both civilian and military applications. Fully tested to withstand durability, shock, vibration, temperature and harsh weather, the system is currently on active service with the Ukrainian Armed Forces. 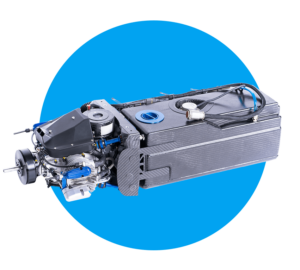 The PD-2’s engine module is based around a 4-stroke 100cc gasoline engine that runs on regular A95 fuel and consumables that are available world-wide. A 500W electric generator powers all equipment on board and charges batteries during flight. The engine can be remotely started with the push of a button, and integrated sensors provide real-time status information such as RPM, temperature and fuel level. 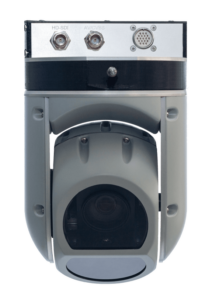 The UAV can be equipped with a wide range of payloads, including UKRSPECSYSTEMS EO/IR gimbals with digital video stabilization and target tracking, as well as third-party sensors such as LiDAR, synthetic aperture radar, and cell phone trackers. Communication options include RF line-of-sight (LoS) datalink, 3G/LTE, and SATCOM.

Cargo delivery modules –UAV can deliver via a dropdown system in the fuselage or under the wings, or land for loading and unloading

The PD-2 UAS is ideal for a range of both civilian and military applications, including:

The PD–1 UAV is multipurpose modular fixed-wing UAV designed for surveillance missions. It is a combat-proven solution and has been officially on service with Ukrainian Armed Forces since 2016, following two years of testing. During this time, the PD–1 UAV has demonstrated its performance capabilities, anti–jamming features, and overall effectiveness while being able to operate in harsh environments.

The PD–1 UAV is a lightweight, highly customizable platform available with a wide range of options to fit any type mission and operational environment.

Modular design
Drone can be assembled and disassembled quickly (within 10 minutes). The system can be customized on-the-go, to fulfill mission requirements – easily add, remove or replace on-board equipment.

Engine
Reliable 4–stroke engine for more than 10 hours of endurance. Electronic Fuel Injection upgrade is available for maximum endurance (up to 30% fuel economy).

Remote engine start
Engine can be started remotely or automatically restarted during flight.

The VTOL module increases the wing span to 5 meters, and the maximum flight time is 8 hours with 7 kg of payload and a full tank of fuel.

With fully automatic take-off and landing functionality, the PD-1 VTOL UAV is easy to operate and ideal for maritime missions, particularly if the drone operates from a ship deck. 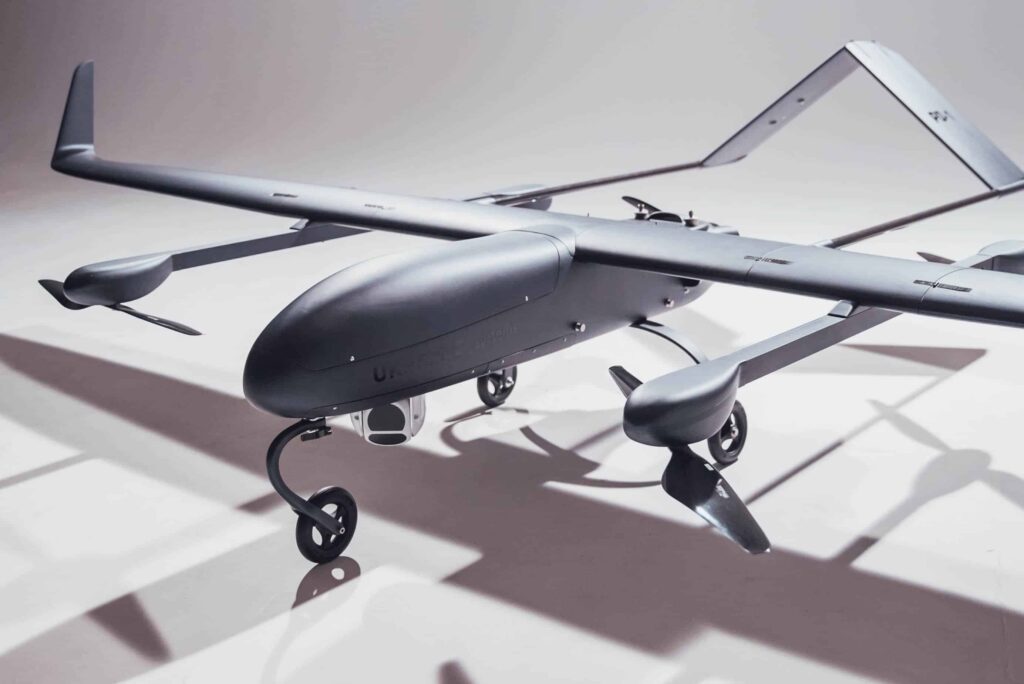 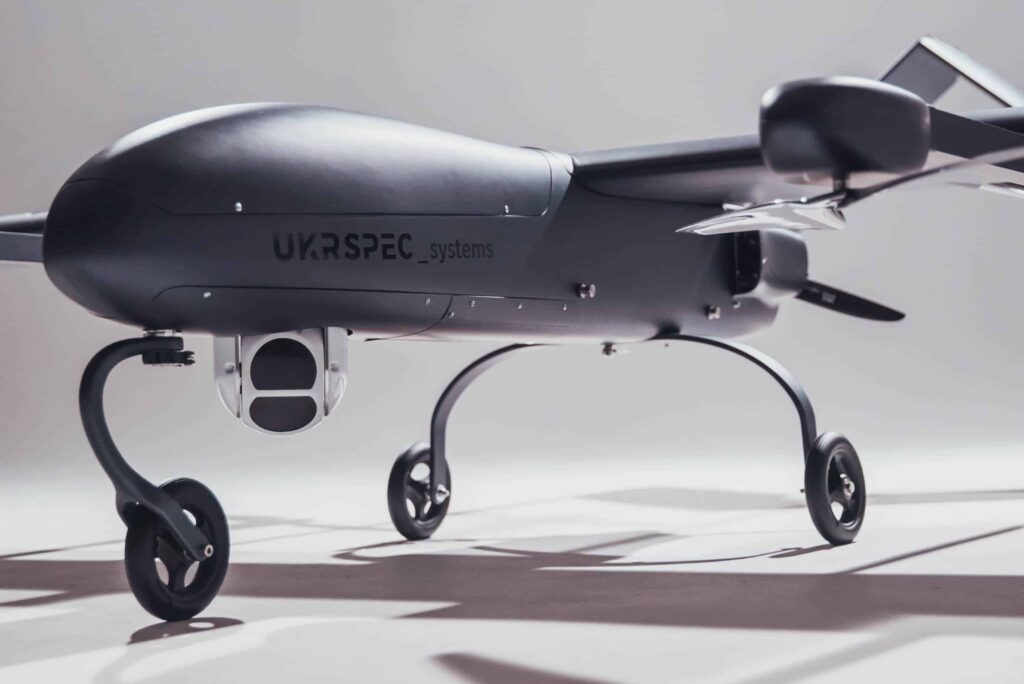 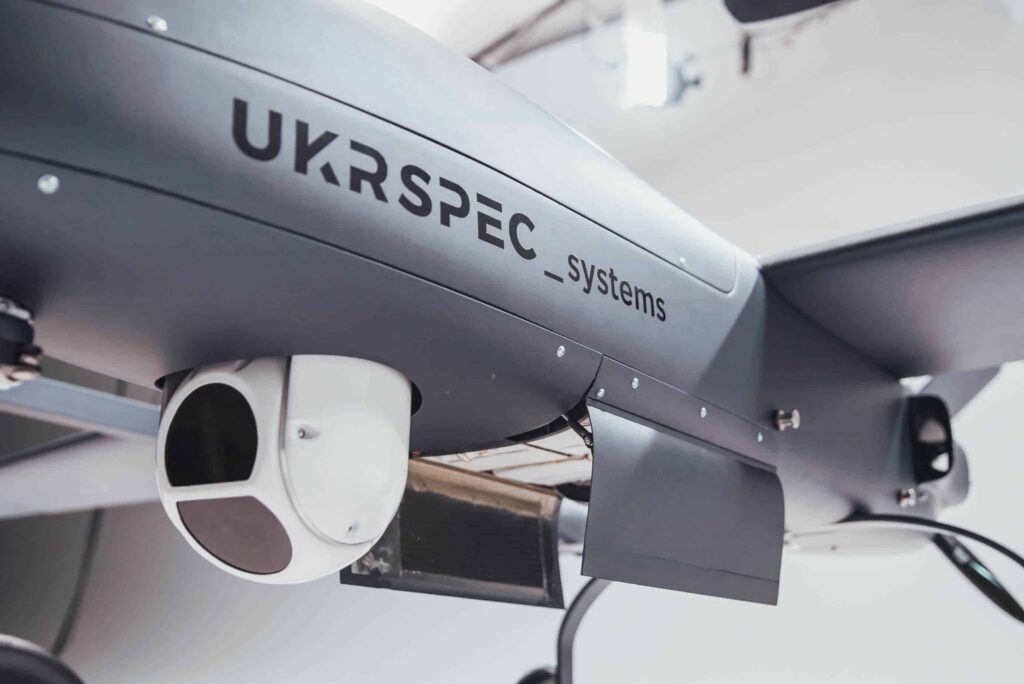 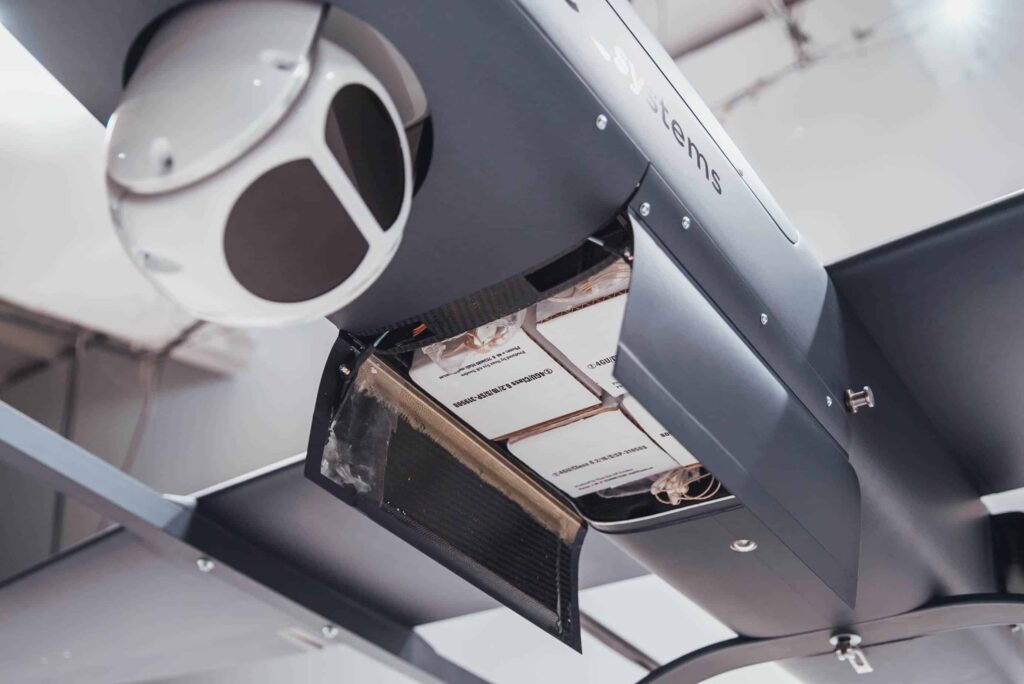 We offer a unique package delivery module for the PD–1 UAV. It can carry a payload of up to 7 kg in one or separate containers, which can be dropped from the UAV by parachute during flight.  The container size and shape can be customized according to specific applications.

Powered by a gasoline generator, the GLS-1A pneumatic catapult is compatible with many UAV platforms, and allows drones to be launched from remote areas in various weather conditions, with an operating temperature range from -25° to +40° С. 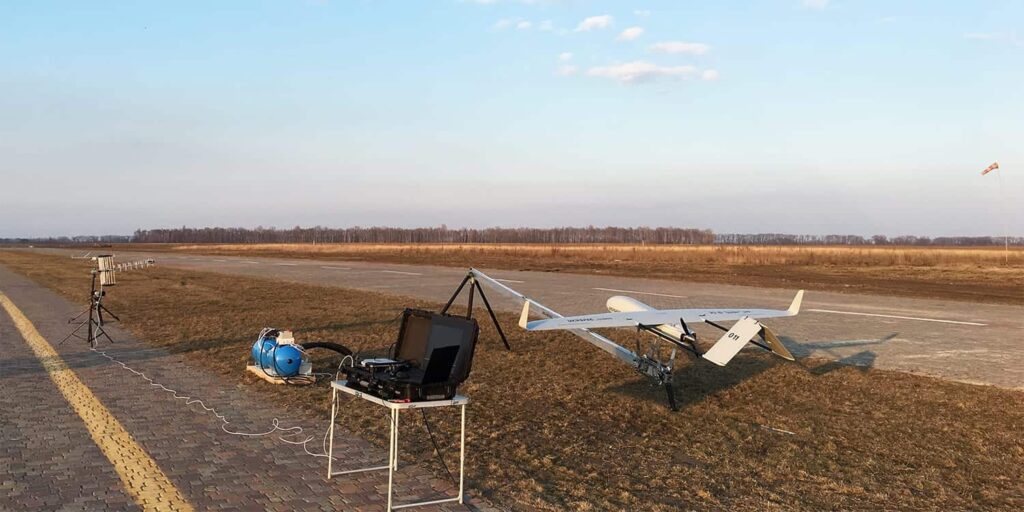 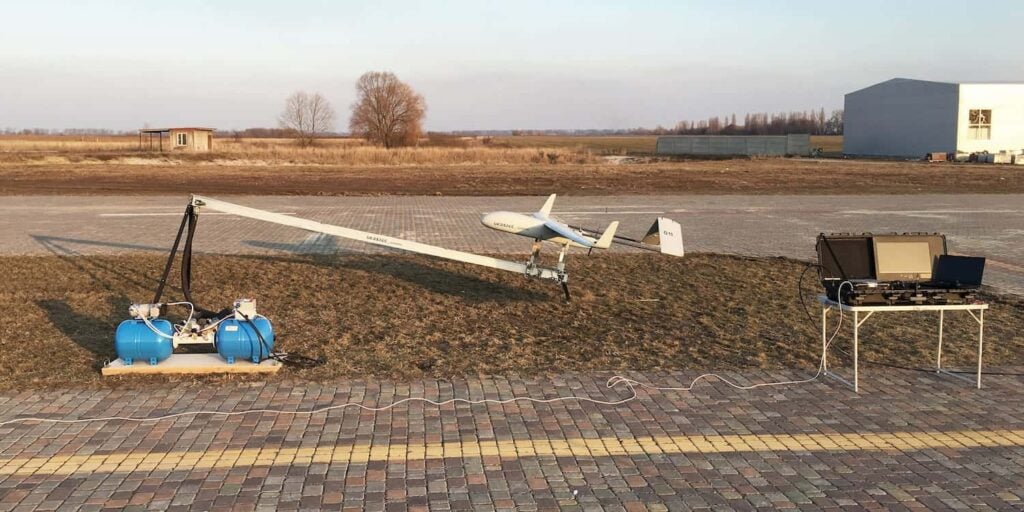 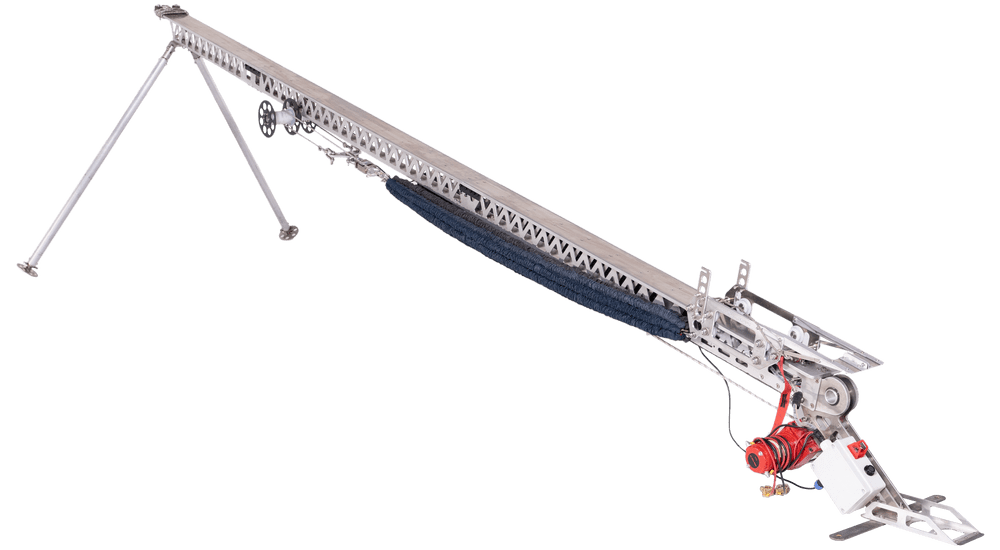 Our SCL-1A UAV launcher system is designed for drones with a takeoff weight of up to 10 kg and a takeoff speed of 25 m/s (90 km/h). Capable of working under a variety of weather conditions, the launcher can be operated remotely with a cable of up to 100m in length and is powered by a lead-acid battery or a vehicle power supply.

The system can be transported, assembled and operated by just two people. Ukrspecsystems offers a comprehensive training course on the operation of the UAV launcher for all customers. 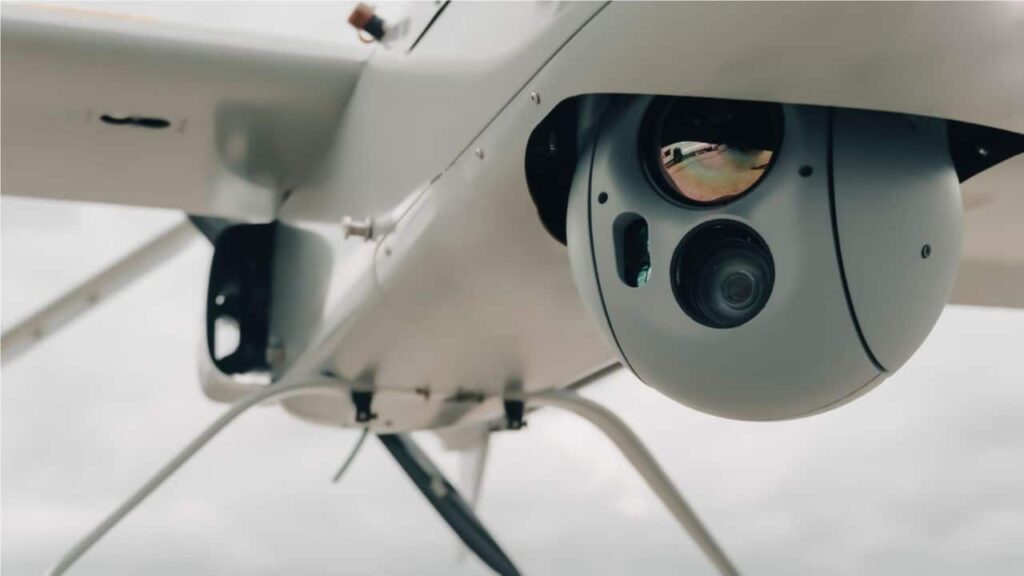 The USG-400 is a multipurpose 2-axis gyro-stabilized gimbal designed as a turnkey plug-and-play solution for Class 1 and Class 2 UAVs. 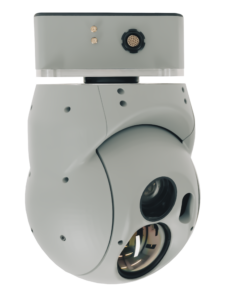 The USG-400 can pan a full 360 degrees and features state-of-the-art onboard video processing for digital video stabilization, moving target tracking and video enhancement. 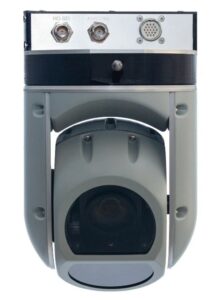 The USG-212 is a multi-sensor gyro-stabilized gimbal equipped with a Sony Full HD 30x optical zoom block camera, and a 40mm IR camera that allows effective detection and tracking of targets even in low-visibility conditions. An optional on-board image processing unit adds advanced features such as target tracking, coordinate lock and video stabilization.

The ITAR-free unit is sealed and weather-proof in even the harshest of conditions. The integrated anti-vibration damping system ensures high image quality even at maximum optical zoom. 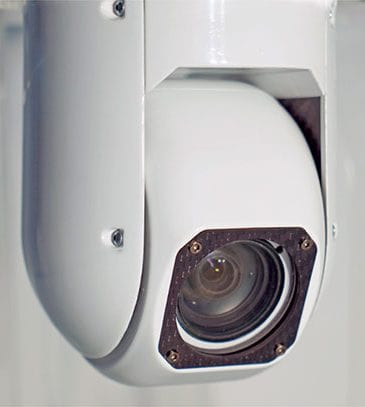 The USG-211 is a compact 2-axis gyro-stabilized gimbal for fixed-wing and multirotor UAV platforms.

Equipped with a Full HD 30x optical zoom Sony camera, with anti-fog and video enhancement features, the USG-211 gimbal captures high-quality imagery and can be used for a range of applications.

The USG-211 gimbal rotates 360 degrees, allowing targets to be tracked in any direction; and the sealed dome housing ensures the unit can be operated in harsh and extreme weather conditions. 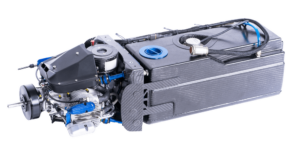 Our all-in-one UAV propulsion module combines an internal combustion engine with a 300W onboard electric generator, electric ignition and a variety of other essential subsystems.

It features one-button remote starting functionality as well as the ability to automatically restart the engine during flight.

The UAV engine system is provided as a single block for easy installation and maintenance, and is fully compatible with Pixhawk UAV autopilots right out of the box. A variety of built-in sensors, including fuel level, engine temperature, air temperature and RPM, provide real-time data for monitoring the status of the engine.

The UAV engine unit can be fully customized by Ukrspecsystems to suit your specific unmanned aircraft platform and mission requirements. 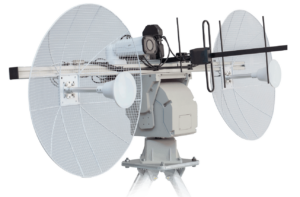 The system features two communication channels to ensure maximum reliability, with one for telemetry and video transmission and the other for backup telemetry on another frequency. The precision tracking antenna is equipped with a built-in video camera for visual control over the drone at close to mid-range distances, and can be optionally equipped with a directional high-gain antenna.