What is a Gimbal? 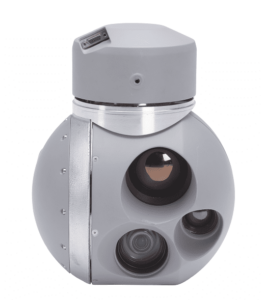 A gimbal is a support that allows rotation about a single axis. A set of two or three gimbals, mounted at 90 degrees to each other, allow a mounted object to remain level and independent of the rotation of its support regardless of the movement of the gimbals. A two-axis gimbal will provide stabilization for pitch and roll only, whereas a three-axis gimbal will provide stabilization for roll, pitch and yaw.

Gimbals are used to stabilise camera payloads that have been mounted on drones and other autonomous vehicles such as UGVs. The gimbal integrates an IMU (Inertial Measurement Unit) that responds to motion and provides inputs to a controller that activates separate motors to keep the payload steady on each axis. The gimbal can thus compensate for unwanted movements such as vibration, wind, and other unwanted shaking. A three-axis gimbal will result in better overall image quality than a two-axis gimbal, but will draw more power and weigh more due to the extra motor.

Gimbal systems fall into one of two categories – brushless gimbals or servo gimbals. Brushless gimbals utilise brushless motors, which feature faster and smoother operation, resulting in better image quality. Servo gimbals provide less stabilization due to less smooth movement, but are also lighter than brushless gimbals, which may be a consideration for smaller unmanned aircraft that have a strict payload limit. 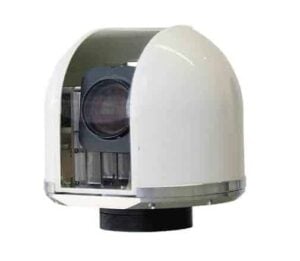 Gimballed camera systems are used for a wide variety of unmanned systems applications, including aerial surveillance (ISR), mapping and broadcasting, in addition to standard still image and video footage capture. Some gimbal systems will be designed with a particular drone in mind, which others may be compatible with a wide range of unmanned aircraft and thus may require calibration for a particular target platform.

A wide range of camera payloads are available for unmanned vehicles, including HD cameras with high optical zoom, thermal infrared and night vision.