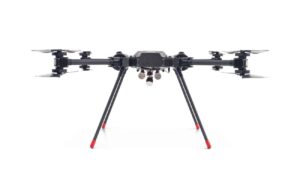 Hybrid power drones and UAS (unmanned aerial systems) use multiple distinct energy sources to power their flight. Hybrid power systems are usually used to augment the capabilities of electric batteries, which are heavy and bulky and provide a significantly lower energy density than other energy sources such as gasoline and combustible fuels. Drones powered solely by batteries can therefore be limited in endurance and range, as well as payload capacity.

Hybrid drone platforms may include fixed-wing UAVs, multirotor hybrid electric drones and unmanned helicopters. They will commonly utilize a power system that incorporates an internal combustion or gas turbine engine as well as a battery. Rather than being used to directly drive the UAV, the engine is configured as a generator and used to produce electricity that can be used to power the drone’s motors and propellers as well as other systems, and keep the drone’s batteries charged during flight. 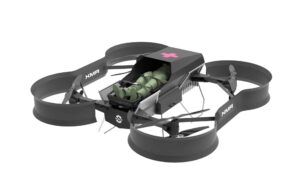 Gas-electric hybrid drones may be able to stay aloft for hours without landing, compared to the typical flight time of less than an hour for fully battery-powered drones. They can also be redeployed in much less time, as refueling with gasoline or other liquid fuels is a significantly quicker process than recharging a battery.

Hybrid UAS can carry a variety of payloads that make them suitable for a wide range of long-endurance and heavy-lift applications, such as mapping and surveying, military ISR (intelligence, surveillance and reconnaissance), cargo delivery and precision agriculture. The additional payload capacity may also be used to carry an extra fuel tank, increasing their endurance and range further.

Hybrid drone power systems may also pair an electric battery with other energy sources, such as hydrogen fuel cells or solar panels.