Hydrogen-powered UAVs (unmanned aerial vehicles) and drones use fuel cells to convert hydrogen into useful electrical energy that can be used to power the drone’s propulsion system and other components. The fuel cells also take in oxygen from the air and produce only water as an emission, making them highly environmentally-friendly compared to other drone power methods.

One of the most common fuel cell technologies utilized by hydrogen drones is PEM (proton exchange membrane). PEM cells use a solid polymer membrane to separate the positive and negative terminals of the cell. Hydrogen is fed to the anode, where the atoms are separated into protons, which move through the membrane to the cathode, and electrons, which take an external route to the cathode. This flow of electrons is harnessed to provide the current output of the cell. PEM cells are highly suited to drone applications as they are power-dense and thus provide an excellent power-to-weight ratio.

Hydrogen UAVs may also be equipped with a small rechargeable battery in addition to the fuel cells. This allows extra power to be provided during times of peak demand such as takeoff and high-speed flight. Multiple fuel cells may also be stacked within the hydrogen drone propulsion system in order to provide extra power output.

In addition to environmental footprint, hydrogen drones also have a number of other advantages. These include the ability to provide greater flight endurance than drone batteries, with many multirotors able to extend mission times from a typical 30 or 40 minutes to several hours. Hydrogen cylinders can also be refilled very quickly, whereas batteries can take many hours to fully recharge.

Hydrogen-powered drones are suitable for a variety of long-range, long-endurance and BVLOS (beyond visual line of sight) missions, including delivery, inspection and monitoring of large-scale assets such as pipelines and powerlines, SAR (search and rescue), and military ISR (intelligence, surveillance and reconnaissance). 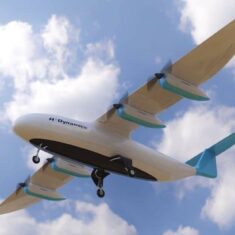