Deep Trekker has released a case study that details how the company supported Pipetek, a pipe inspection contractor, on inspections of submerged tunnels and other structures for Toronto Water.

The goal of this particular mission was to evaluate the condition of a combined sewer and storm tunnel for Toronto Water. PipeTek needed to provide a report of the tunnel and associated pump and intake structures to determine the best next steps for managing the structure. Since this was a 530m long, fully submerged tunnel, the REVOLUTION ROV was chosen for the task. Longer tunnels with sediment in the bottom proved to be more difficult for pipe crawlers, robots that PipeTek had significantly more experience with at the time.

The problem with pipe crawlers is that their wheels or tracks stir the sediment, obstructing the view of the tunnel. They also have a shorter range of view, because their cameras can only raise so far from the bottom of the tunnel. Human entry in this long of a tunnel would be far too dangerous. By utilizing a free swimming ROV with an imaging sonar, PipeTek was able to capture a thorough report of these tunnels and structures.

The REVOLUTION ROV is unique for the rotating camera head that also rotates the sonar head. As you rotate your camera up and down, that sonar also rotates up and down. In this image, the camera is actually pointed straight down negative 90 degrees.

Rotating Sonar to Face Straight down to View Shaft 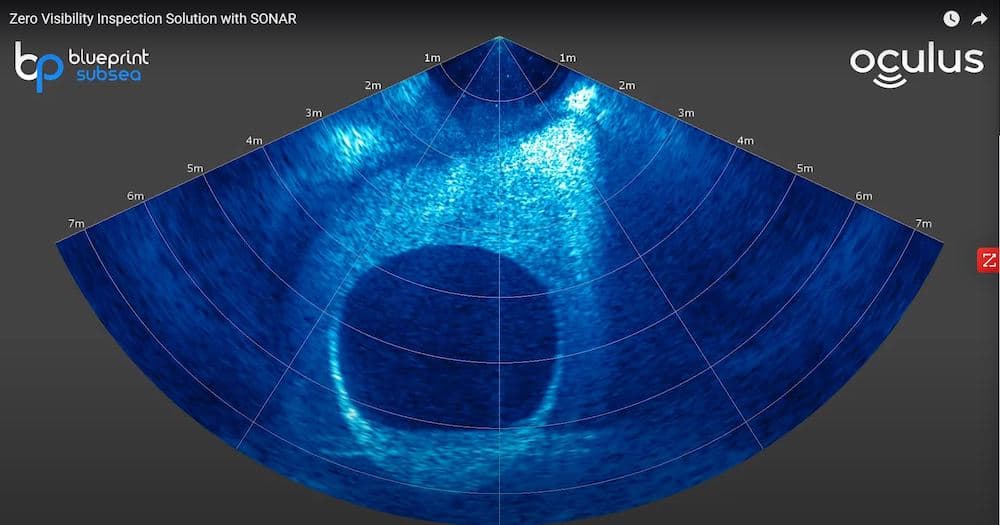 The 20-degree sonar beam is spread along the wall in front of the ROV. The nose of the ROV is up against the wall, and so you are seeing the texture of that wall as if someone was shining a bright flashlight straight down. When you point the sonar straight up and right at the edge of the tunnel, you can see the tether and a little bit of its shadow, as well as those bubbles coming up out of the mouth of the tunnel. Bring the sonar back down to zero degrees at that angle, and you get a cross-section of the walls that are around the ROV. Angle it up a little bit, you see the roof of the tunnel in front of the ROV. If you go past 90 degrees, you can see right at the edge of the shaft. There are those bubbles going up the shaft coming out of the tunnel and my tether again will bring that sonar back down. 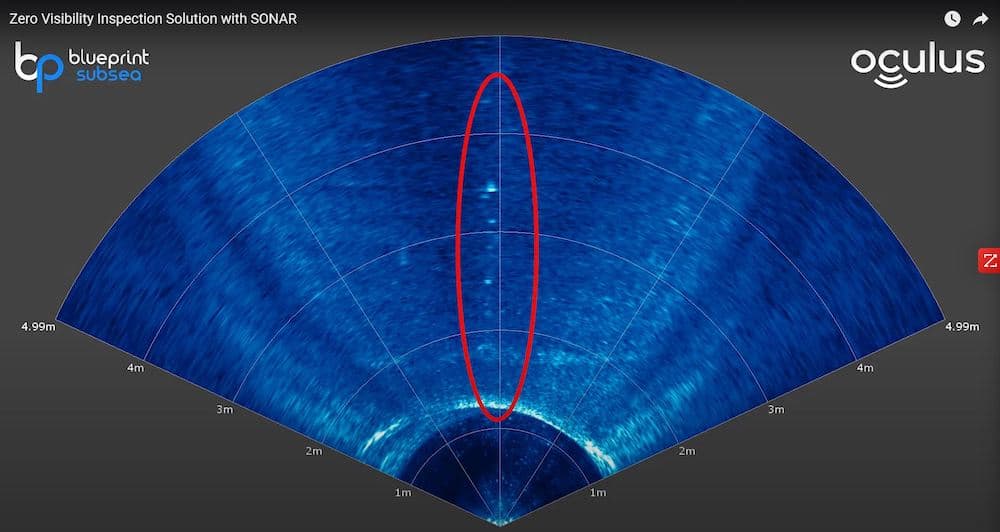 Now, the other thing that’s interesting with the rotating sonar is that you could point that sonar slightly down and see the bottom of that tunnel. Unfortunately, it’s covered in sediment, so this didn’t give the operators as good an idea of the structure. In this inspection, they focused on the crown. You can see there those two lines inside the tunnel are the edges of that sediment layer. As we moved along, looking at the roof of the tunnel, you could identify cracks where there’s a bit of a shadow cast behind that, so it means that there’s something elevated and they found it had a lot of the cracks. 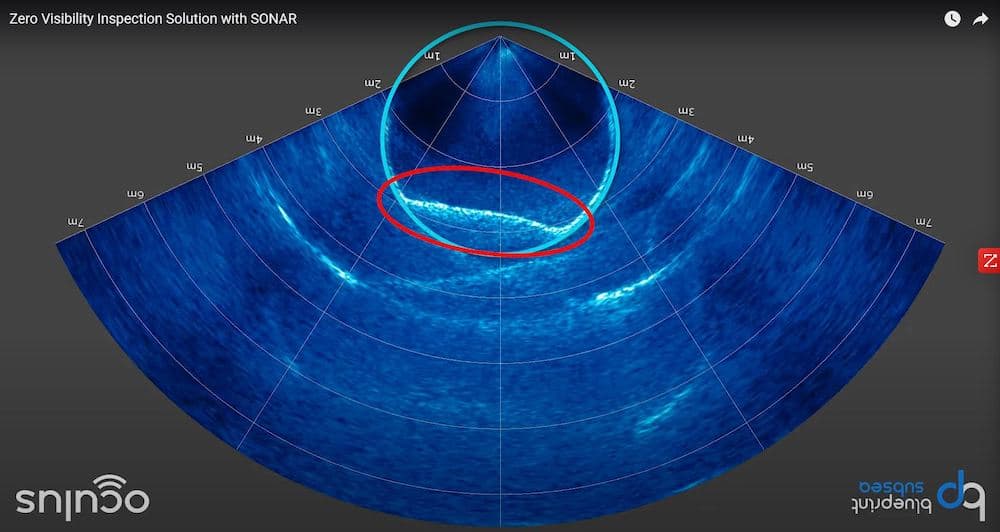 There is some sediment built up as water pushed its way out of the crack and that sediment stuck to the wall of the tunnel. Another interesting application here is you can point this sonar straight down, as you saw earlier, but because they are inside the surround structure, they are getting a cross section of the tunnel. So that line at the very bottom that’s crossing what you would expect to be a perfect circle. That’s the surface of the sediment. From there, you could take regular sediment depth measurements while driving through a tunnel.

Identifying a protruding lateral in the tunnel 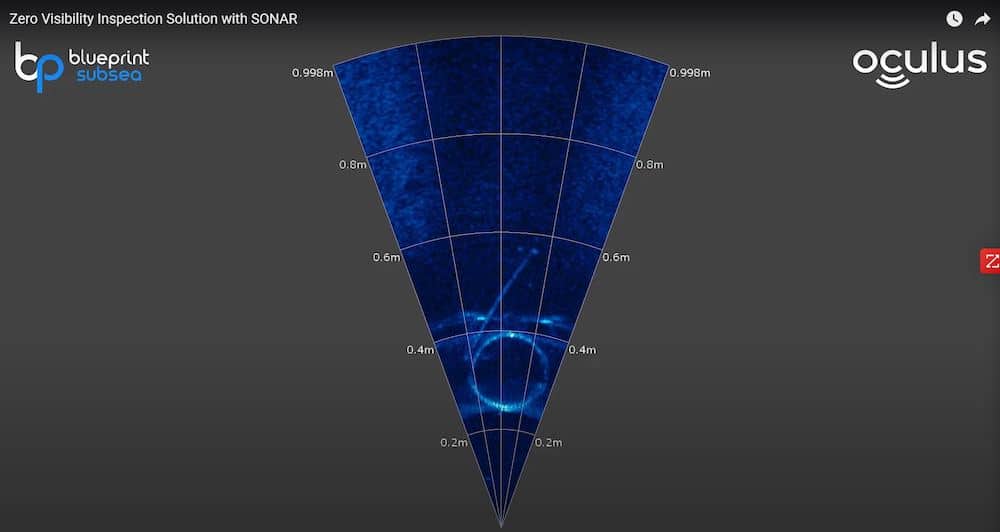 Another example of an interesting structure that was found is pictured below. Tilt the sonar up, and you see there’s a long shadow. Any time you see a long shadow, it means that the object is tall. There’s something projecting downwards out of the roof of the tunnel. By maneuvering the ROV and sonar head around, you can get a better look from different angles. As they get close and sort of slightly adjust the angle, you can see there’s a cylindrical object. This is a lateral pipe that’s projecting into the roof of the tunnel. You can see there’s a little bit of debris sticking off the end of it, so they mark the location of that lateral. 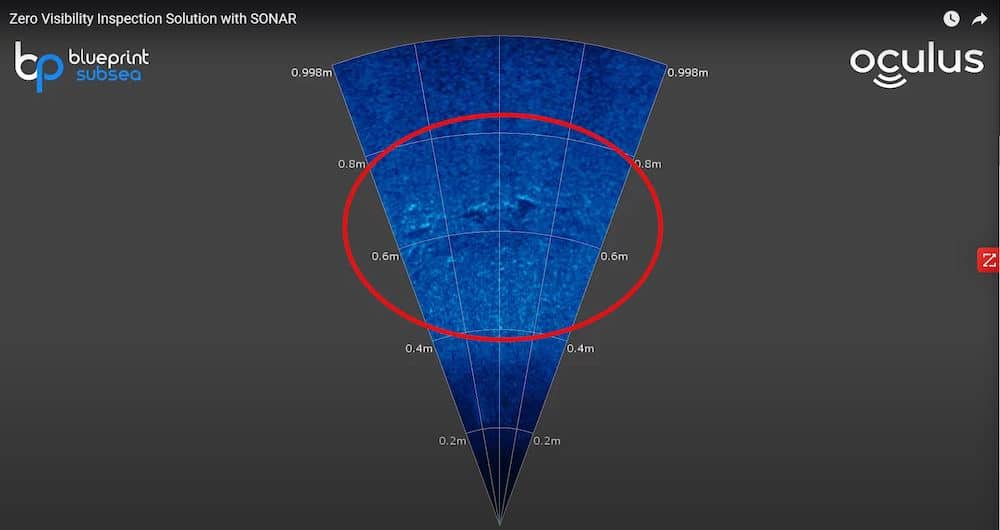 Interestingly, it was the only one seen in this 530-meter-long tunnel. Here’s another interesting artifact and you’ll see two instances of it. There are bubbles down the middle, with a bit of an oval, along with the other end of that oval. This oval crack is something not uncommon in tunnels like these. By rotating side to side, you’re able to get a slightly better visual of its shape.

Using the sonar software either live during the inspection or after the inspection when reviewing, you can use the ruler tool to measure these artifacts. When they popped up at the other end of one of these tunnels, they were in a large reservoir base, which collects water so there isn’t excessive outflow. There were three pumps in this section, off to the right, some of those vertical structures with the thicker material at the bottom.

Using the sonar, not only are operators able to see the general structure looking for obstructions or debris, but they can get a sense of the texture of the wall, identifying obvious cracks or breaks crumbling. Even with the sonar set to 10m range, you can see clear detail within 50 cm of the sonar head. Having these visuals is also useful for having situational awareness near the pumps, understanding where not to drive to avoid tether entanglements. 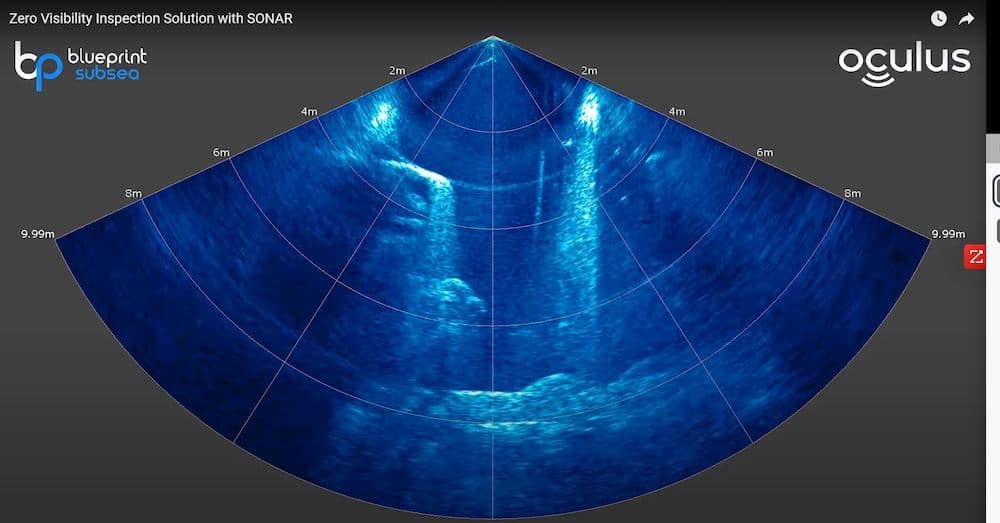 In these environments, it is best to set the gain low, move slowly, and rotate your sonar around to get a better idea of your surroundings. A calm and careful approach will not only prevent tether entanglements, which are really only a worry near complex structures such as a pump, but it will also produce clearer sonar footage. This is especially important if other stakeholders are viewing the inspection after, it will make it easier for them to add notes and digest what was inspected. 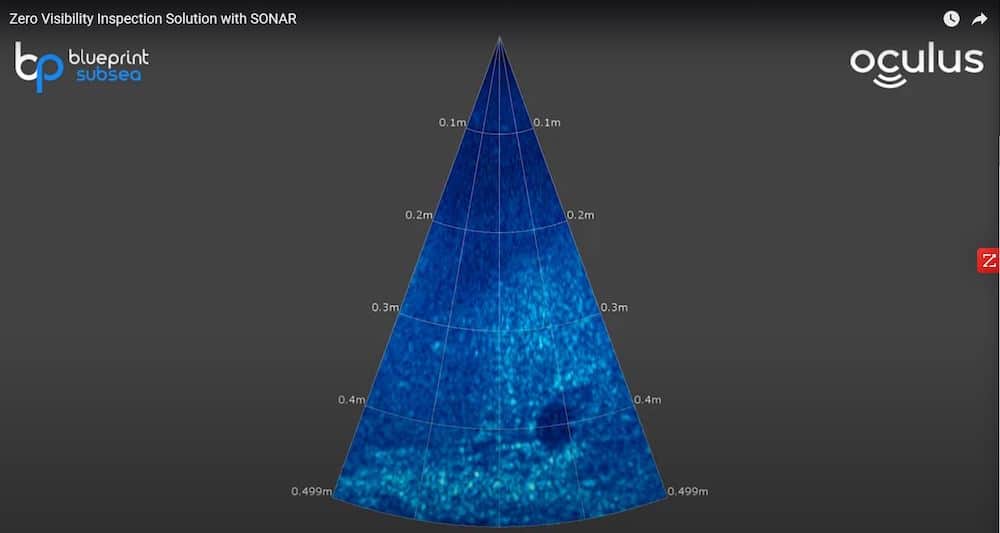 In this shot, they did an outward-facing orbit with the sonar pointing down, looking for artifacts in a shaft wall. You can see a pit, so they get close, take some measurements of its location and its size. One last part of this survey involved using the ROV to help with the retrieval of a tripod mounted scanner. The tripod broke and the scanner fell to the bottom of the shaft. The grabber on the ROV is typically able to assist in retrievals of tools, but this scanner’s heavy weight combined with smooth shape made it difficult to grip with our manipulators. Other objects, whether it is drowning victims, concrete slabs or even e-scooters, have proven to be perfect targets for Deep Trekker’s manipulators to retrieve. 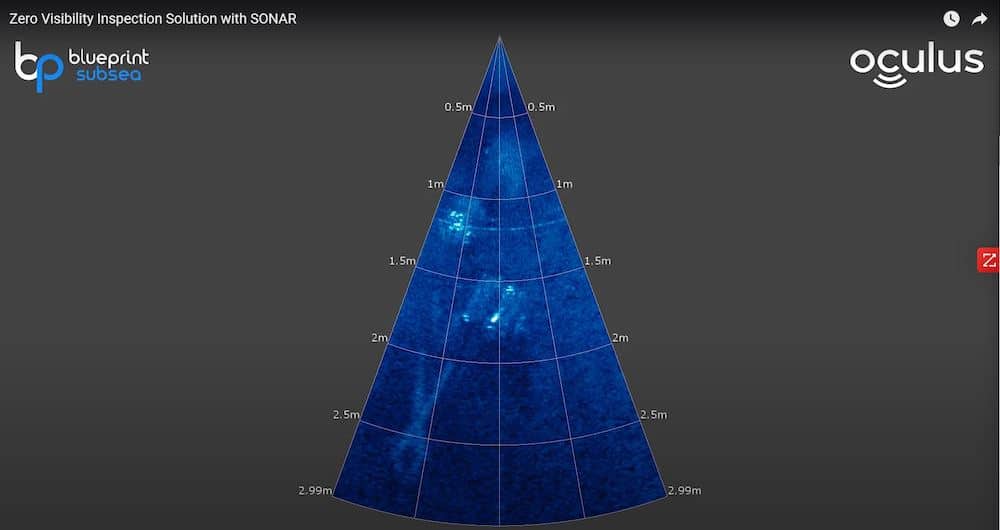 A large claw on the end of two ropes was used to retrieve it. When they pull on one rope, the claw closes around an object, and you pull the other one to retrieve the target. The ROV with the sonar positioned near the target was able to monitor this process and help with where and when to pull the large claw shut.

Overall, this survey was a complete success despite having zero visibility for the camera. Using the imaging sonar combined with the flexibility of the rotating camera head on the REVOLUTION, PipeTek was able to identify several points of interest for Toronto Water to evaluate and plan to reinspect, such as protruding laterals, pits, cracks, and sediment levels. Not only were these points of interest located and photographed, they also were able to measure these with the sonar tools available.

Imaging sonars are an extremely versatile and capable option for many different applications, not just tunnel inspections. They are often referred to as the most important sensor on an ROV by ROV pilots.

Using this type of technology can seem daunting at first, but it is easier once you have even a little bit of first hand practice. The important part of determining the right tool for your project is to know what the end goal of the inspection is.

If you need help finding the right technology for your missions, reach out to our robotics experts to find the right option for your applications and budget.