Propellers for Drones and UAVs

Propellers are devices that transform rotary motion into linear thrust. Drone propellers provide lift for the aircraft by spinning and creating an airflow, which results in a pressure difference between the top and bottom surfaces of the propeller. This accelerates a mass of air in one direction, providing lift which counteracts the force of gravity. 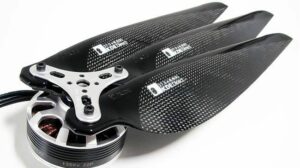 Propellers for multirotor drones such as hexacopter, octocopter and quadcopter propellers, are arranged in pairs, spinning either clockwise or anti-clockwise to create a balance. Varying the speed of these propellers allows the drone to hover, ascend, descend, or affect its yaw, pitch and roll.

Propeller speeds are varied by changing the voltage supplied to the propeller’s motor, a process that is handled by an Electronic Speed Controller (ESC). The correct signal is fed to the ESC by the drone’s flight controller, which relies on inputs from either the human pilot’s controller or an autopilot, and may also take into account information from an IMU (Inertial Measurement System), GPS and other sensors.

Hybrid VTOL UAVs combine VTOL capability with the standard forward propulsion of a fixed wing UAV. In many hybrid VTOL UAVs, rotary lift propellers are typically incorporated into the aircraft’s wings, which then transition for forward flight. 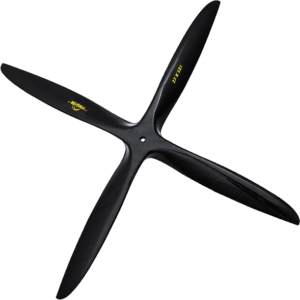 Shorter propellers require less energy to get up to a particular speed, and due to reduced inertia are easier to control and quicker to change speed. Longer propellers generate more lift for a particular RPM and create greater stability when hovering, but require more motor power.

Propellers with higher pitch will provide more lift than a flatter blade and allow a drone to fly faster for a particular RPM, but will drain the drone battery faster due to requiring more power from the motor.

Heavy-lift drones will typically require longer propellers with smaller pitch, as they require stability rather than speed, and will be able to carry larger batteries or power sources such as hydrogen fuel cells in order to offset the increased requirements.

Drone propellers can be constructed with two, three, or four blades. Propellers with more blades provide greater lift due to more surface area moving through the air per rotation, but are more inefficient due to increased drag. Smaller drones with limited battery life are best suited to propellers with fewer blades.

Drone propeller blades are most commonly constructed from plastic or carbon fiber. Plastic propellers are cheaper and more flexible, allowing them to absorb impact better. The increased stiffness of carbon fiber propellers, although providing less durability, decreases vibration thus improving the flight performance of the drone and making it quieter. Carbon fiber is also lighter than plastic, allowing weight savings.