What are Anti Drone Systems?

Anti drone systems are used to detect and/or intercept unwanted drones and unmanned aerial vehicles (UAVs). Hostile drones may be used to deploy explosives, smuggle contraband or gather intelligence on sensitive assets, and the proliferation of low-cost UAVs has led to an increase in incidents.

Anti drone technology is deployed to protect areas such as airports, critical infrastructure, large public spaces such as stadiums, and military installations and battlefield sites.

The presence of rogue drones can be detected by several different methods. Specific RF transmissions on UAV-specific frequencies can be scanned for, and individual makes of drone can even be identified by their command protocols. RF scanning will not detect all drones, as aircraft that have been programmed to fly autonomously may not be sending or receiving RF transmissions from a pilot or base station.

Electro-optical (EO) and infrared (IR) sensors can be used to detect drones based on their visual and heat signatures, respectively. These sensors may need to be paired with machine vision and artificial intelligence algorithms that can reduce the risk of false positives and false negatives. EO/IR gimbals for anti-drone systems are available that combine multiple cameras into one payload and can be mounted on a fixed site or moving vehicle.

Acoustic CUAS detection systems compare the noise made by drone propulsion systems to a database of sounds. Their accuracy can be affected by other noise in the vicinity.

Radar detection can also be used to detect UAVs. Traditional military and aviation radar systems, which are designed to pick up large aircraft, may struggle to pick up smaller drones, or to distinguish them from other objects such as birds. They may also find it difficult to deal with drones that move slowly or hover.

Modern anti drone radar systems may use a variety of radar technologies, including ESA (electronically scanned array), staring radar, and micro-Doppler, depending on requirements for range, size of protection zone, number of simultaneous targets to track, and ability to deal with environmental clutter. They provide 3D airspace tracking and use sophisticated signal processing techniques to accurately detect and identify drones.

As each detection method has its advantages and drawbacks, multi-sensor anti-drone systems will combine different sensor types along with sensor fusion algorithms to provide a complete integrated solution.

Once a rogue drone has been detected, many counter UAV systems provide the option to neutralize it. Anti drone weapons systems use guns or missiles in conjunction with a targeting system to shoot down the drone. New military systems are also under development that will use a high-powered laser or microwave to destroy the target drone. These methods cannot be used in built-up or civilian areas, and the debris from a destroyed target must be taken into account. 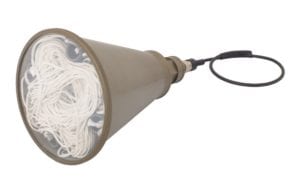 Other physical countermeasures include anti-drone nets and weighted lines, which may be launched with compressed air or propellant from a handheld device or from another UAV. Nets may be used in conjunction with built-in parachutes to capture the drone and neutralize the threat without destroying it, which can result in useful evidence or intelligence.

Kinetic counter UAV devices can be dangerous and as such are mostly limited to remote areas and military applications. Several methods of defeating drones can be utilised that do not result in the destruction or uncontrolled rapid descent of the drone.

Signals vital to the operation of the drone can be interrupted by generating other electromagnetic signals in the vicinity of the aircraft. The RF link between drone and pilot can be disrupted in this way, as well as the satellite link used for GNSS/GPS navigation. Depending on the make, drones that have been jammed in this way may hover in place, descend safely to the ground, or return to a set “home” location.

Anti drone jamming systems may be fixed site or vehicle-mounted, and are also available as handheld devices similar in feel and operation to rifles and small arms. CUAS jamming systems can disrupt legitimate transmissions such as air traffic management, so care must be taken in certain environments.

Spoofing can be used to take control of a UAV’s GNSS receiver and divert its flight path. Some drones can also be hacked, using malware to exploit security vulnerabilities in the firmware and take control. These counter UAV methods will not work for all drones, as many are fitted with anti-jamming technology and use highly secure embedded systems and encrypted communications.

What is counter-drone technology?

Counter drone technology is used to deal with hostile UAVs, and may encompass a range of detection, identification, tracking and interception methods.

How does anti-drone technology work?

Anti-drone technology encompasses a wide range of countermeasures that detect, identify, track, disable or destroy UAVs. Often multiple sensors and devices will be integrated into a single anti-drone system.

How can drones be detected in the sky?

Flying drones can be detected by scanning for the RF signals used at certain frequencies for communications. Cameras can also be used to detect their visual and heat signatures, and acoustic signatures can be picked up and compared to a library of known UAV recordings.

How do you disable a drone?

Drones can be disabled via “hard kill” methods, using traditional munitions to cripple or destroy the drone. Electronic countermeasures can also be used to disrupt RF or GNSS satellite communications broadcast and received by the drone.

How does a drone jammer work?

A drone jammer generates large amounts of electromagnetic interference that will disrupt communications or navigation signals used by the drone.

How do anti drone guns work?

Call for US DOD Attendees at Counter-UAS Technology Conference