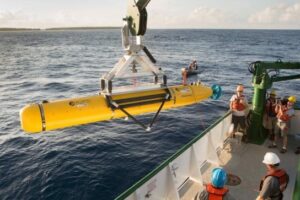 The Bluefin Robotics AUV equipped with a Ranger 2 tracking transponder

Acoustic positioning technology from Sonardyne Inc, Houston, was selected to play a key role in a recent expedition aiming to solve one of the greatest mysteries of the 20th century. A Bluefin Robotics AUV (Autonomous Underwater Vehicle) was equipped with a Sonardyne Ranger 2 underwater target tracking system which was used by The International Group for Historic Aircraft Recovery (TIGHAR) to search for the remains of the Lockhead Electra aircraft flown by Amelia Earhart during her failed circumnavigation attempt in 1937.

For the Earhart project, Bluefin Robotics’ AUV was purchased by Phoenix International Holdings, an experienced marine services and salvage contractor. Working with TIGHAR, Phoenix used the AUV to search the deep waters around the small island of Nikumaroro in the Western Pacific, believed by many to be where Earhart crash landed. Using multi-beam and side-scan imaging sonars, Bluefin’s AUV conducted a wide area search of the selected site to detect and confirm potential targets of interest. From onboard the Ka`imikai-o-Kanaloa (K-O-K) research vessel, Ranger 2 monitored the AUV’s position in real time as it conducted its search, logging the coordinates of seafloor anomalies that warranted further investigation.

Ranger 2 is a high performance underwater target tracking system designed upon Sonardyne’s latest 6G® and Wideband™ 2 technology platforms. The system calculates the position of a subsea target by measuring the range and bearing from a vessel-mounted transceiver to an acoustic transponder on the target, a technique known as Ultra-Short BaseLine (USBL) positioning. Multiple subsea targets over a wide area and range of water depths can be simultaneously and precisely positioned without having to deploy any additional equipment into the water. This results in fast and efficient survey operations.

Will O’Halloran, Bluefin Robotics’ Marine Operations Manager commented, “We’ve long been a user of Sonardyne products so selecting Ranger 2 was a natural progression from the previous products we’ve used. The functionality of the latest 6G hardware and reliability of the Wideband 2 signal is just fantastic.”

Kim Swords, Account Manager at Sonardyne said, “Bluefin and Sonardyne have worked together on many projects so we were really pleased when they selected our Ranger 2 system, even more so when we heard the historic nature of the project it would be working on. Using our 6G product ranges means that Bluefin will continue to benefit from exceptional tracking and high speed data telemetry.”

The expedition departed on 3rd July on the 75th anniversary of Earhart’s disappearance. TIGHAR’s 10th expedition to the island, the mission was filmed by The Discovery Channel.