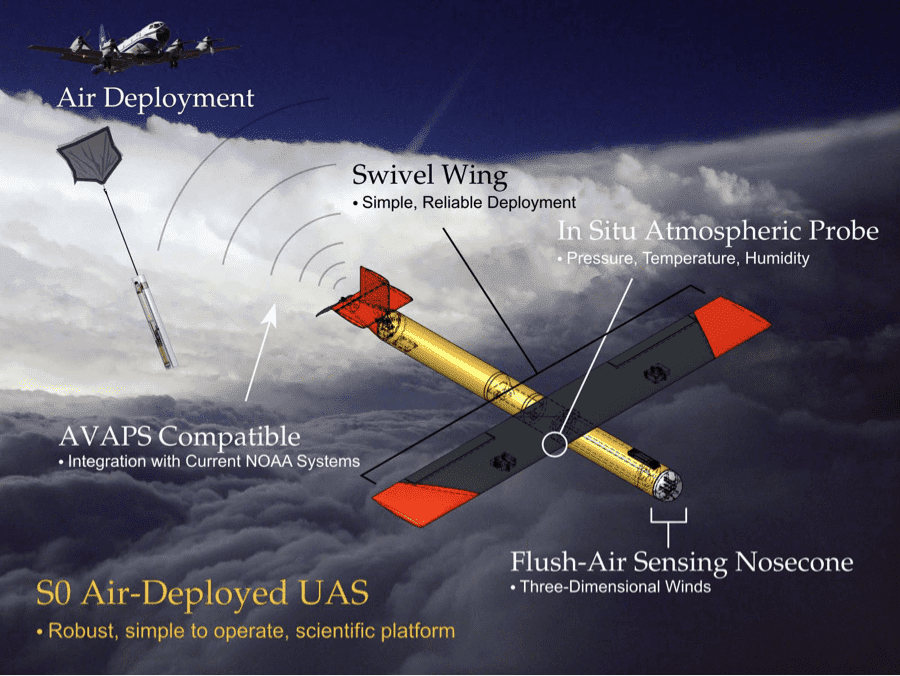 Black Swift Technologies (BST) has announced that it has been awarded a National Oceanic and Atmospheric Administration (NOAA) contract to develop an air-deployed unmanned aircraft system (UAS) to perform lower boundary layer observations in difficult atmospheric conditions that are commonly encountered in convective storms, e.g. hurricanes and tropical cyclones.

BST is proposing a vehicle, called the S0 Air-Deployed UAS, that can be tube-launched from an aircraft, such as NOAA’s Lockheed P3 Orion. The design of the S0 UAS system is intended to mimic the operations of radio dropsondes already used by NOAA in these environments, reducing the workload of the operators and keeping with the current overall concept of operations. BST’s goal is to provide a cost-effective, air-launched UAS designed to augment pressure, temperature, humidity and sea surface temperature measurements, with 3D wind data. The S0 UAS is designed to provide intelligent and autonomous extended sampling (1+ hour of targeted observations) where the aircraft can make its own navigation decisions based on the atmospheric sensor data.

Key to the effectiveness of this strategy is BST’s ability to use AVAPS (Airborne Vertical Atmospheric Profiling System) for long-range backhaul of the science data, guaranteeing transmission at the current operational ranges for the dropsondes. Use of the AVAPS system means that no communications need be sent to the UAS after release without the addition of a separate command and control link. The vehicles are intended to be deployed close to the sea-surface and eyewall of the storm to capture essential data. BST designed custom avionics enabling the UAS to fly autonomously in a turbulent environment while integrating critical components including those necessary for 3D wind sensing along with interfaces to the RD-41 sonde and radio. As the vehicle will not be recoverable, it is essential that the data is relayed in its entirety during the flight.

“With the destructive force demonstrated by hurricanes in 2018 (Florence and Michael in particular), hurricane forecasting remains a priority for scientists researching and striving to predict the paths and intensities of these storms,” states Jack Elston, Ph.D., CEO of Black Swift Technologies. “Our solution leverages technology and communication protocols NOAA has demonstrated effective, while our simplified design keeps the cost of the aircraft to a minimum, ensuring that multiple vehicles can be deployed for each storm, dramatically increasing the amount and accuracy of the data captured.”