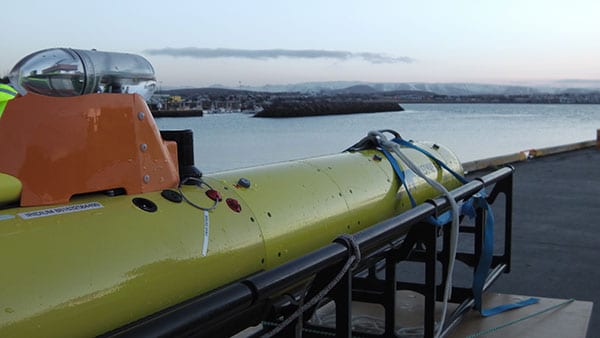 Teledyne Gavia has completed a contract with the Armament Department of the Polish Ministry of Defence for the delivery of two Gavia Defence AUV systems for mine countermeasures (MCM). The provision includes all required topside equipment and AUV operation & maintenance training. Teledyne Gavia completed a competitive tender process for delivery of the first MCM AUVs into Poland, winning the contract on the basis of best value with conformance to the required functional and technical parameters.

The Gavia vehicles delivered are equipped with the latest EdgeTech 2205 side scan sonars. The simultaneous dual frequency 600 /1600 kHz EdgeTech 2205 side scan sonar and the Kearfott T24 inertial navigation system (INS) allow the Gavia to gather high resolution, accurately navigated, sonar images while remaining submerged for several hours of continuous operation at survey speeds up to five knots. The addition of a high accuracy GPS and the augmentation of the INS by Long Base Line (LBL) beacons ensures precise navigation during even longer duration and deeper missions. This combination of sensors make it ideal for mine countermeasures (MCM) and search and salvage operations, in continental-shelf waters and beyond.

The sea acceptance trials took place at the Teledyne Gavia proving grounds near Kopavogur, off the west coast of Iceland. The tests were supervised by representatives of the Polish Navy, and the results were checked by specialists from 4 District Military Division (Gdansk). Data analysis during the SATs and training confirmed the vehicle performance and suitability for MCM search, location and identification missions.

The vehicles were supplied through Enamor Ltd, Teledyne Gavia’s official representative in Poland. Enamor is a research and production company focused on new technology and active in many projects in Poland in the fields of navigation, communication, hydrography and automation.

Lukasz Rozga, Director of Strategy and Development at Enamor, stated, “A key factor in our success was the good communication between Teledyne Gavia and Enamor. This strong relationship and the strengths of the Gavia AUV team meant that we could meet the delivery date. I attended the sea acceptance tests (SATs) in Iceland and was particularly impressed with the production process, training, and the comprehensive SAT trials.”

Arnar Steingrimsson, Director of Vehicle Sales at Teledyne Marine Systems, said, “We are very excited to see the Gavia Defence AUV providing an autonomous subsea capability for another NATO Navy, increasing safety and security. The Gavia AUV operational flexibility, the ease of through-life support, and modular upgrade paths have really contributed to the suitability of this AUV for addressing a variety of critical defense challenges.”

The Gavia Defence AUV has a low-logistics, fully modular design. This facilitates rapid transport and maintenance, and is designed to increase operational availability and reliability. Each Gavia can also be equipped with a variety of additional sensor modules. This creates an asset which can be configured for MCM, search & salvage or hydrography missions, without needing to be dedicated to just one task. In the future, the AUVs delivered in Poland can be equipped with modules for multi-beam bathymetry, sub-bottom profiling, or even submarine emulator sonar training targets.

This contract is significant as it is the first purchase of AUVs for MCM by the Armed Forces of Poland. The knowledge gained from operating the Gavia AUVs will help develop the concept of use of AUVs in the Polish maritime theatre. Significant benefits are expected from a low-logistics AUV asset that can carry out both MCM and hydrography missions.