In this case study, YellowScan explains how its Surveyor LiDAR sensor was mounted on a drone to help establish a baseline and record the status of the Széchenyi Chain Bridge in Budapest before restoration work started. 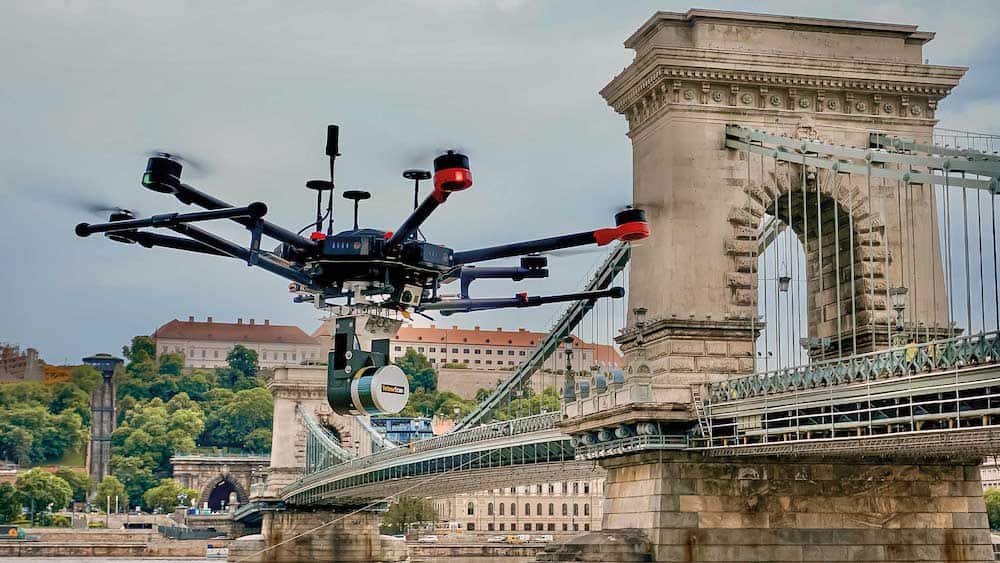 This project, led by our customer Ventus-Tech in Hungary, aimed to establish a baseline and record the status of the bridge before its restoration started.

The scan of the present state of the bridge will help to compare its status after the restoration is done, where a final scan will be performed.

Ventus-Tech’s main goal was to showcase the capabilities of state-of-the-art sensors and post-processing solutions, to help the workflow of construction companies, and to raise awareness of BIM-related solutions.

They wanted to meet the requirements of the modern age and create a solution that could be integrated into BIM systems, by taking up this opportunity to work on the Chain Bridge, which is a national symbol of innovation in Hungary.

What was the challenge?

In order to survey all parts of the bridge, various sensors and unmanned vehicles were needed.

A DJI M600 rotary wing drone with an RGB camera was used to take top and side views using RTK GPS, and a LiDAR sensor, the YellowScan Surveyor, was mounted on a drone to map the bridge.

A static ground laser scanner and a robotic boat were also used to take RGB camera images of the bridge’s underside, as well as a multibeam sonar to scan the riverbed to remove bombs and debris.

Flying legally in the heart of the city center was no easy task. Ventus-Tech had to get special permission from the aviation authorities. The decision stated that the Carmelite Monastery (Prime Minister’s Office) and the Sandor Palace (President’s Office) had to be kept at a safe distance of 150m. They were also not allowed to fly over the Ministry of Interior. With this information in mind, they planned their flight route and complied with the city’s request.

The use of a LiDAR system was essential to carry out this task. Ventus-Tech chose the YellowScan Surveyor for this project, which is the first LiDAR system they acquired.

This system was ideal for this mission due to its versatility, ease of use, and 360 degrees laser scanner. It is also ideally suited for urban surveys subject to strict flying regulations requiring extra-lightweight payloads.

The point density was 100points/m2 and the accuracy was under 5cm, which gave Ventus-Tech a complete pointcloud with a high level of detail. Some parts of the structure, where aerial scans were not possible, were augmented with TLS scans, and the photogrammetry pointcloud was adjusted based on the ALS results.

Ventus-Tech indicated that the data quality obtained was excellent and that they have now developed a workflow to seamlessly combine data from different sources.

“The support from YellowScan has always been excellent. We have a long-standing relationship and are very happy to work with them,” said Balint Vanek, Chief Technology Officer , Ventus-Tech. “The Chain Bridge is such an iconic architecture landmark in the middle of Budapest that both Ventus-Tech and Bimfra were happy to work on it pro-bono. It was only the icing on the cake that the construction company performing the renovation took the results very seriously and considered including the survey for future projects even during the bidding phase. The value of a digital twin cannot be connected to a single stage of construction, it can be utilized at pricing, design, construction and even at operation stages. Thanks to the YellowScan Surveyor, we were able to successfully complete this project!” 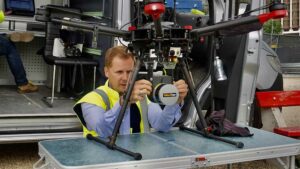 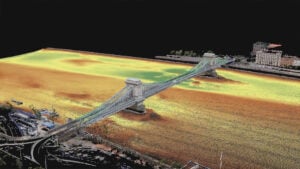 LiDAR pointcloud of the Chain Bridge