Marine and maritime control systems provide remote command and control of USVs (unmanned surface vessels), as well as UUVs (unmanned underwater vehicles) including ROVs (remotely operated vehicles) and AUVs (autonomous underwater vehicles). They may be designed around laptops or tablets or constructed as standalone hardware, and will typically need to be designed to be resistant to water and salt spray. Some ROV controllers are even designed to be submerged underwater, allowing divers to use them in close proximity to the vehicle. 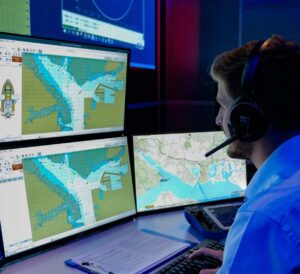 Marine controllers may have LCD screens that can receive HD video feeds from payloads on board the vehicle. They will typically allow users to monitor a wide range of parameters such as fuel or battery levels, speed, and attitude. Marine control systems may also provide tracking of the vehicle on a real-time map, and allow the operator to plan missions, define waypoints, and select when operations such as data capture are to be performed.

Unmanned helm controllers will typically use some kind of wireless control technology such as RF or cellular (3G/4G/5G) to communicate with the USV. 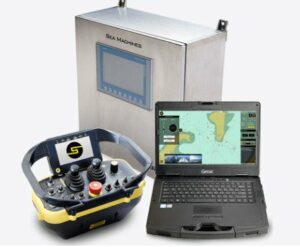 UUV and USV controllers will be equipped with a variety of switches and joysticks that allow the operator to control both the marine vehicle itself and its payloads and equipment. These payloads may include visible and thermal cameras, sonar, weapons systems, and scientific sensors and instruments. ROVs may also have grabber claws, manipulators and other tools that allow them to perform underwater tasks such as inspection or bomb disposal.

ROVs use a tether that connects the controller with the vehicle and additionally may provide power. AUVs are difficult to communicate with using standard wireless technologies once they have submerged, due to the fact that electromagnetic waves do not propagate well in water. Acoustic modems can be used, which transmit data via underwater sound waves.