Suppliers and manufacturers of engines and propulsion systems for unmanned vehicles (UAVs, UGVs).

Propulsion systems for UAVs (unmanned aerial vehicles) and other unmanned systems such as UGVs (unmanned ground vehicles), AUVs (autonomous underwater vehicles) and USVs (unmanned surface vehicles), typically rely on either a fuel source or an electric battery source. In the case of aerial and waterborne unmanned vehicles, this power source will turn one or more propellers or ducted fans that provide thrust for either forward movement or hovering. UGVs will be driven by traditional engines, electric systems, or a hybrid of the two.

Battery-powered electric propulsion systems use a motor to drive propellers, fans or wheels. Drone motors can be found in multirotor drones, fixed-wing UAVs that rely on forward flight, as well as unmanned surface, ground and underwater vehicles. Electric motors for UAVs and other unmanned vehicles may be brushed, which are simpler but noisier and more prone to wear, or brushless motors which are more efficient but often costlier.

Electric propulsion systems are essential for multirotor UAVs due to the more precise control and response time required to adjust the differential thrust control required for hovering. They are more suitable for smaller aircraft due to the relative bulkiness and extra weight of engines and liquid fuel, and are also more reliable.

The disadvantage of electric propulsion systems is that batteries offer a lower energy-to-weight ratio than fuel, and so offer significantly shorter flight times. Batteries also take time to recharge, so preparing for subsequent missions will take longer than simply refilling a fuel tank, if multiple batteries are unavailable. 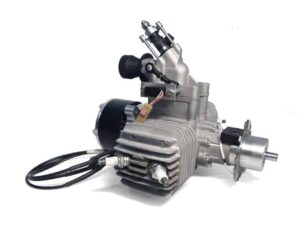 Rotary UAV engines, including Wankel engine designs, utilise a rotor within a housing to undertake the combustion cycle. They produce less vibration than piston-driven engines and feature a favourable power-to-weight ratio, but may be less economical and require more maintenance. Gas turbine engines are more reliable and provide a greater power-to-weight ratio than piston and rotary engines, but are more expensive to develop and currently are only viable for larger UAVs.

Hybrid gas-electric drones have been developed which utilise both a fuel combustion engine as well as batteries. The energy load is shared between the two systems, meaning that a smaller, more efficient engine can be used. These hybrid systems offer a greater flight time compared to solely battery or fuel-powered drones of a similar size, thus enabling applications such as autonomous package delivery and enhanced surveillance and inspection missions.

Other Methods of Unmanned and Drone Propulsion: 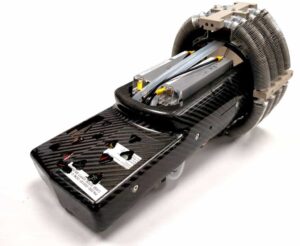 Fuel cell propulsion technologies are also being developed for UAVs and UGVs. Fuel cells use hydrogen to generate an electric current which can be used to power a motor. Hydrogen has a higher energy density than current battery technology and produces only water as emissions. However the technology is currently very costly, and hydrogen can be difficult to store and transport.