Sonardyne has released a case study explaining how Trendsetter Vulcan Offshore used the company’s Subsea Monitoring, Analysis and Reporting Technology (SMART) and Compatt 6 transponders to help an operator rectify a completed wellhead at a deepwater site that had suffered from misalignment.

Operations in deepwater are a significant challenge requiring the latest generation of subsea equipment and installation techniques. While the majority of operations do go to plan, there are occasions when they don’t and an innovative approach to deepwater intervention is required.

Houston headquartered engineering specialists Trendsetter Vulcan Offshore (TVO) were set just such a difficult deepwater intervention challenge. They were brought in to help an operator rectify a completed wellhead at a deepwater site that had suffered from misalignment. The wellhead, which was in more than 2,000 m water depth, had been bent and there were concerns other components might have been damaged.

TVO were tasked with finding a solution to bringing it back to a vertical position. This would allow intervention access to the well for remediation and abandonment operations, so it could be permanently sealed. A key challenge was to carry out this work extremely carefully and in a controlled manner, in order to prevent any further potential damage to the wellhead.

TVO came up with an innovative solution to the problem. It proposed a ring of six subsea tensioning systems, mounted on suction piles positioned in a ring on the seafloor around the wellhead. Each one would be connected via a rope to a Trendsetter-supplied lower riser package (LRP) installed onto the wellhead. By carefully tensioning the ropes, they would be able to then bring the wellhead back into an upright position.

To do this in a safe and controlled way, TVO required a monitoring system which would provide:

Traditionally, inclination data is acquired by visually checking subsea bullseye levels attached to a structure using a diver, or, in this water depth, a remotely operated vehicle (ROV). Similarly, visual displays on the tensioning systems would be the source of the tension data, also read using an ROV.

However, these techniques add a significant amount of time, given the 30-40 m radius of the circle of tensioning systems, even if, as was the plan, only two would need to be actively tensioned during the righting operation. Bullseyes can also be mis-read.

Another alternative option is to deploy battery powered accelerator and inclinometer measuring bottles, using an ROV. But these would have to be retrieved to the surface after each measurement, so would also mean a lengthy operation, potentially taking days. 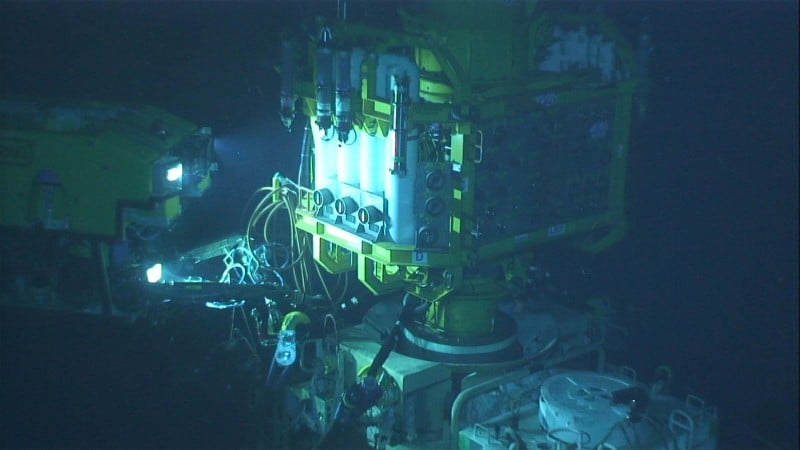 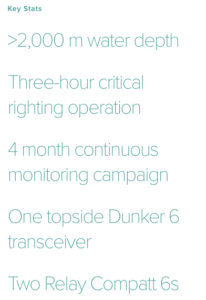 Instead, TVO proposed and successfully deployed a wireless, intelligent, digital underwater monitoring solution. This provided near real-time inclination and tension data to the operations team at the surface (around three minutes delay). It comprised of two of Sonardyne’s Subsea Monitoring, Analysis and Reporting Technology (SMART) and six Compatt 6 transponders.

The internal inertial measurement unit in each SMART was used to calculate pitch and roll data from two points either side of the LRP, allowing TVO to calculate the wellhead’s bend angle in the local coordinate frame.

This data was then transmitted acoustically, using the SMART’s internal modem, to the surface at three-minute intervals. The Compatt 6s were interfaced with the load cell shackles at each tensioner point on the LRP and transmitted the tension readings to the surface at less than one-minute updates.

The righting operation took just three hours, using an ROV to tension the winches at two key tensioning units, one at a time. In comparison, using the alternative methods would have taken days.

Throughout, the TVO team and the operator were able to view a constant near real-time visualization of the inclination of the wellhead and the tension that was being applied at each tensioning system. This was done via an internet-based dashboard developed by TVO, so that any member of the wider team, including the operator, from anywhere in the world could watch.

“It was a very unique challenge. There were a lot of studies and approaches analysed within the customer group before making a decision to what the right approach was. They chose ours, using Sonardyne’s SMARTs and Compatt 6s, and it worked very well,” says TVO’s Kim Mittendorf.

“We really could control the two tensioners with the amount of tension we needed in near-real time. While the ROV was tensioning the winch, more than 2,000 m below us, we could see what direction the wellhead was moving in, how the pitch and roll angle changed.

“All the data was also live streamed to a website so that the customer, offshore and onshore, could monitor the operation in near-real time. This drove their decision making and gave them the comfort to continue with the operation as planned.”

Paving the way for a safe well abandonment

Following the righting of the wellhead, the tensioning and monitoring system was kept in place to allow safe intervention and final abandonment operations to be completed. During this phase, the data transmission rates were reduced to once every few hours.

For redundancy, two of the suction piles had relay Compatt 6s installed on them. This was due to a concern that direct line of sight to the transceiver from one or more of the Compatt 6s wouldn’t be possible.

In addition, the ROV had a ROVNav 6 transceiver, as another backup communications pathway. However, none of these were required as the LRP located SMARTs and the six Compatt 6s connected to the load pins were able to directly communicate with the topside transceiver.

The entire campaign proved to be a complete success. Thanks to TVO’s engineering and Sonardyne’s monitoring technologies, the operator was able to safely and efficiently decommission this challenging deepwater wellhead.

Initial skepticism from the operator in using a hydro-acoustic approach for data transmission was also overcome and through the success of the project, further confidence has been built into the technology for future applications.