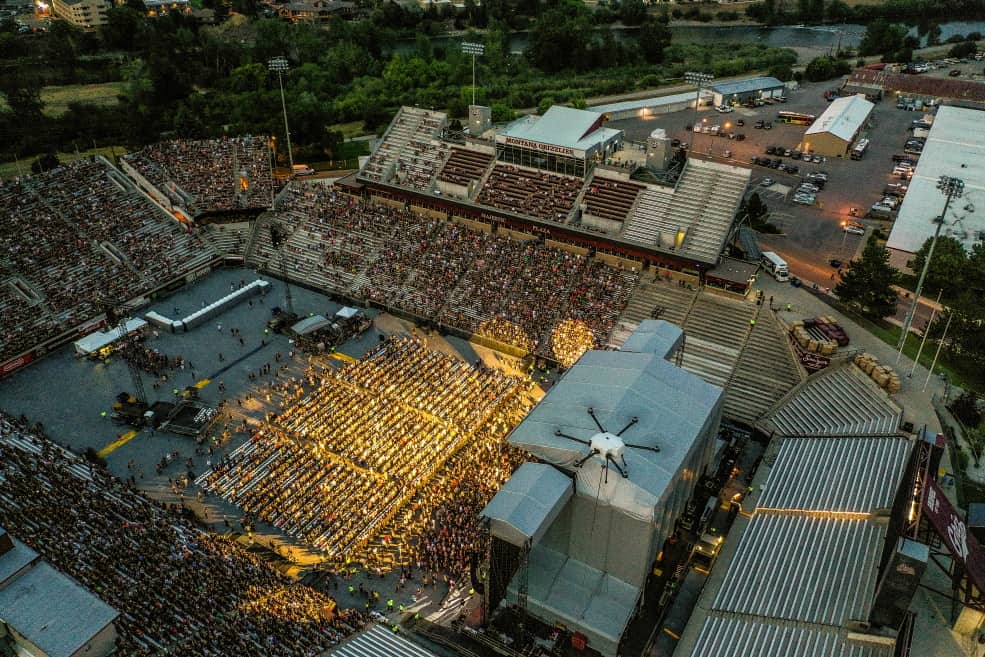 Elistair’s Orion 2 UAV (unmanned aerial vehicle) has been deployed at the University of Montana’s Washington Grizzly Stadium to provide security for the 14,000 attendees at a Guns N’ Roses concert. The UAV flew continuously for six hours and delivered a persistent aerial view of the stadium and surrounding area that was streamed directly from the Orion’s electro-optic and infrared sensors.

The Orion 2’s dual sensor payload, combined with the flight endurance of the vehicle, meant that the system could carry out an uninterrupted, day into night mission without the need to land. Deployed by Elistair’s partner CloudCover on the roof of a building in the immediate vicinity of the stadium, the drone provided the command post with a permanent view of the stadium grounds, both entry and exit points, as well as sales areas, parking lot and hiking trails on the mountains surrounding the University of Montana campus. Local police, university police, and state troopers were on hand to spot individuals in distress and identify any suspicious behaviour in or near the stadium within a three-mile radius.

After the concert, the Orion 2, equipped with its infrared camera, also ensured the smooth exit of fans and employees, and located groups of people hiding in the stadium in order to evacuate them. During the 6-hour operation, the Orion 2 provided crucial support to the emergency services, who were able to rely on the drone’s continuous flight time to maintain an overwatch of the area and to ensure effective coordination.

Brad Giffin, University of Montana’s Chief of Police, commented: “By using CloudCover services flying Elistair tethered drones, I was able to gain a significant advantage in keeping people safe at a large event. The imagery provided by CloudCover enabled a huge increase in my situational awareness, the ability to witness events first-hand as an Incident Commander, and to provide assistance to my officers if needed without having to rely simply on radio voice communications.”

Richard Simpson, Cloud Cover Co-Founder and mission commander, said: “Elistair’s tethered products provide an incredible capability for event security staff by providing the endurance for the duration of an event with the aerial perspective of the entire event area.”

Watch a video of the Orion 2 deployment at the concert below: