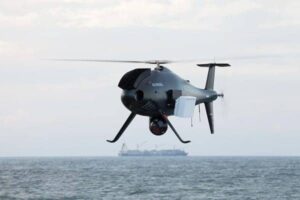 Schiebel’s dedication to the maritime domain and its ability to respond to the evolving unmanned systems requirements lead to a series of trials for the Brazilian Navy from 2nd to 5th June near San Pedro, Brazil, from the Brazilian Amazonas Class Ship APA.

Schiebel’s unmanned helicopter CAMCOPTER® S-100 convinced representatives of the Brazilian Navy and Ministry of Defense of its outstanding capabilities as a VTOL UAS (Unmanned Air System), after series of sorties were flown from the sea near San Pedro, Brazil (160 km east from Rio de Janeiro). In support, a number of presentations were given over four days to the attending officers, covering the unique maritime capabilities of the S-100.

The demonstration flights were conducted using scenarios agreed with the Brazilian Navy and designed to evaluate the capabilities of its payloads: L3 Wescam MX-10, Selex ES SAGE ESM, Selex PicoSAR Radar and AIS (Automatic Identification System), highlighting the extensive portfolio of available payloads for the CAMCOPTER® S-100. All trials were carried out during both day and night at ranges out to 44 nautical miles with target detection out to 90 nautical miles.

The programme successfully demonstrated the CAMCOPTER® S-100 capability to meet the operational needs of Maritime Commanders in such complex, dynamic environments.