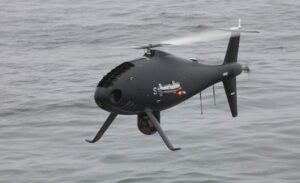 The CAMCOPTER® S-100 Unmanned Air System (UAS) successfully demonstrated its capability across several different maritime scenarios to Dutch Authorities in Den Helder, The Netherlands, on 29 April 2014. Consolidating its unmatched maritime position, the S-100 demonstrated its ability to support maritime commanders and decision makers in the North Sea, west of Den Helder. The North Sea is already one of the busiest maritime areas in the world and the Coast Guard expects this to increase over the coming years.

The demonstrations were executed from a Dutch Navy vessel, using the L3 Wescam MX-10 electro-optic sensor as a payload. The demonstration programme was based around a sequence of scenarios commencing with the CAMCOPTER® S-100 introduction to the audience.

In one of those scenarios a fire onboard a ship loaded with dangerous substances resulted in the crew abandoning the vessel, two crew members are missing and no further information is available. Before the rescue mission begins it is deemed essential by the decision makers that they have “eyes” on the target to assess risks and determine the possible location of the missing crew members. The S-100 is deployed to provide this information as well as giving other useful information to help combat the fire. The CAMCOPTER® demonstrates how it can gather this time critical information quickly and efficiently.

The fight against drug smuggling formed the theme of another scenario. The S-100 is deployed to discretely follow a suspect vessel. Suddenly a rigid-hulled inflatable boat, (RHIB) appears, moving alongside the vessel. The unmanned helicopter observes and records the transfer of drugs and supplies time critical information to the allied ships to intercept and detain the RHIB.

During all scenarios the CAMCOPTER® S-100 ably demonstrated its flexibility, versatility and persistence, all of which are the key to successful operation in maritime environment. Hans Georg Schiebel, Chairman of the Schiebel Group of companies commented: ”This series of trials once again showed how the S-100 can provide a cost effective capability to Maritime Commanders and decision makers whether ashore or afloat.”