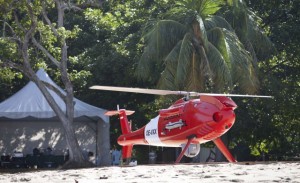 Shiebel will demonstrate the capabilities of the CAMCOPTER S-100 Unmanned Aircraft System during flight displays at Langkawi International Maritime and Aerospace (LIMA) Exhibition, which takes place in Malaysia from 26th to 30th March 2013.

There has been strong interest in the CAMCOPTER S-100 in the region, leading Schiebel to commit to attend the event, in cooperation with their local partner Alaf Strategi, for a second time.

In June 2012, the S-100 successfully completed a series of demanding trials for Malaysian Armed Forces and Malaysian Maritime Enforcement Agency (MMEA) representatives. Operated by Alaf Strategi personnel, the S-100 VTOL UAS flew from a makeshift helipad at the beach various missions out to 30 nm in Teluk Batik, Malaysia. Several maritime ISR missions were performed by day and night, including a mission to identify and track several fast-moving MMEA vessels.

Although S-100 is tested on three oceans of the world, on 14 different classes of vessels, each trial is a unique and challenging experience. Hundreds of takeoffs and landings, relative wind speeds up to 40 knots, hovering close above the helicopter deck and automatically following the ship’s movements, with a subsequent smooth touch down and proven automatic decking capabilities, are just a few of the outstanding characteristics of the CAMCOPTER® S-100.

Zainal Ashraf Awal, CEO of Alaf Strategi Sdn. Bhd. commented, “We are convinced that the world-wide proven CAMCOPTER® S-100 UAS represents the perfect asset for any surveillance mission. The series of regional trials conducted by Alaf Strategi personnel were successful and generated a lot of interest, not only in Malaysia. Our goal is to establish the S-100 as the leading UAS in Malaysia and beyond.”