Surveying the Titanic with Ranger 2 & AvTrak 6

In this article, Sonardyne discusses how OceanGate Inc. used the company’s long-range underwater tracking technology during a six-week survey expedition to further document the wreck of the Titanic. 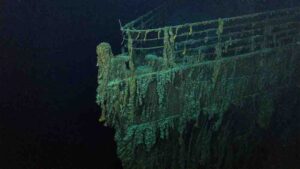 In 2021, OceanGate carried out a survey of the wreck of the Titanic. The goal was to document its decay, repeatedly diving their new human-occupied submersible, Titan, to 3,858 m deep in the North Atlantic Ocean. The work involved imaging the shipwreck and portions of the debris field using the latest multi-beam sonar, camera, and lighting technology, underpinned by our long-range underwater tracking.

OceanGate Inc. is a privately-owned company headquartered in Everett, Washington State. Since it was founded in 2009, OceanGate has focused on increasing access to the deep ocean through innovative construction of next generation crewed submersibles and launch platforms.

In the summer of 2021, the organisation embarked on a six-week survey expedition to further document the wreck of the Titanic. The mission involved repeatedly diving their new human-occupied submersible, Titan, on the wreck. That’s no simple task, with it sitting in 3,860 m water depth in the North Atlantic.

The success of the expedition depended on the accuracy and reliability of the ship-to-sub positioning, navigation and communications systems. OceanGate required equipment with four key capabilities. Firstly, and for safety, two-way text communication between the crew aboard the submersible and the support crew stationed topside throughout the dive. Secondly, highly accurate tracking of Titan’s lat/long and depth, with automatic reporting intervals set by the topside crew. Thirdly, submersible-mounted acoustic hardware depth hardened to at least 4,000 m. And finally (although every effort would be made to keep the surface support ship directly above the submersible throughout each dive), the communications and tracking link to be maintained, uninterrupted, at slant ranges of up to 7,000 m.

Knowing that we have a long track record of supporting organisations like themselves to achieve challenging research goals, OceanGate approached us. They wanted solutions that would meet all the technical and commercial requirements of their expedition. Here’s how we helped.

Deployment of sensor platforms and underwater vehicles is fundamental to undertaking science at sea. Our Ranger 2 USBL system is the preferred choice of many of the world’s leading research institutes to position these. Depending on the equipment configuration, Ranger 2 can simultaneously track multiple underwater targets to beyond 11,000 m – far in excess of OceanGate’s 7,000 m target range for the trip to the Titanic. That’s all without having to first deploy a seabed array of transponders. With Ranger 2, as soon as you arrive on site, you can deploy your equipment and vehicles and begin work – maximising precious research ship time.

But Ranger 2 is more than just an acoustic tracking system. The 6G and Wideband 2 technology platform it’s built on supports (as standard) high-speed, two-way acoustic telemetry. This means it can communicate with, and remotely configure, seabed equipment and robotic vehicles; or in the case of a crewed submersible like Titan, send and receive text messages to and from her crew.

Research projects often involve using a vessel of opportunity, where equipment like Ranger 2 might only be installed for a matter of weeks or months. But as the precision of underwater tracking is rarely something that can be compromised, then the beneﬁts of using Ranger 2 for a project like this, begin before a vessel has left port. Our pre-calibrated, all-in-one transceiver, Gyro USBL (which can also be used as a modem), is perfect for installation on a temporary over-the-side mount. Despite being easy to deploy, it still delivers the same precision as a permanent installation, which must be carefully planned and executed.

All our vehicle instruments are engineered to withstand the enormous pressures of the deepest oceans. Of them all, AvTrak 6 is our most capable option available. Used in conjunction with Ranger 2 USBL, AvTrak 6 combines the functions of transponder, transceiver and seabed-to-surface data telemetry link in one low power unit. That’s a unit that’s also been designed to meet the requirements of a wide variety of autonomous and crewed vehicle mission scenarios. It was the natural choice to support Titan and her series of dives to 4,000 m.

OceanGate pick up the story in their words.

“Sub tracking worked ‘out of the box’ and required very few configuration changes. Installation of topside components was straightforward; the Ranger2 Gyro USBL transceiver on our vessel’s deployment pole; the installation and integration of the GPS receiver; and the Ranger 2 computer in our control room. Installation of components on the submersible was also simple; the upward-pointing AvTrak 6 bottle; the hard-wired communication link between the AvTrak 6 and the 6G Terminal Lite and Marine Robotics software pack we had running inside Titan.

“The Sonardyne survey engineer assigned to remotely support us, Darren Murphy, helped us to work through the initial configuration queries we had with the robotics text messaging software and was extremely responsive to our needs and questions, despite being on a different time zone in the UK.

“The sub’s descent through the 3,800 m water column lasted up to 2.5 hours and was subject to opposing currents that varied each day at different depths. Predicting the sub’s landing spot on the ocean floor without the Ranger 2 was, essentially, impossible. Once the sub landed, the topside crew depended on the accuracy of the tracking system in order to efficiently guide the submersible to a point when the wreck was within range of the sub’s sonar.

“Most other operations have used multiple landers [seabed transponders] to provide their human-occupied sub with a location fix and guidance to the target. But Ranger 2 just needs a GNSS feed and a transponder fitted to the sub – or whatever you might be tracking – to work out where in the world you are. By feeding the sub’s auto-reported lat/long into a purpose-built GIS mapping system, our topside crew could, in real time, compare sightings the sub crew reported via text message with the features near their plotted location on our site map. These invariably matched up and allowed our topside crew to efficiently guide the sub to the target, preserving the sub’s thruster battery power for maximum time on-target.

“Our vessel crew relied on Ranger 2’s automated lat/long reporting and text communications with the sub crew to position the ship for a safe, efficient recovery of the sub on the surface. Throughout the sub’s long ascent, the sub’s position, depth, and rate of ascent were continuously monitored.

“Tracking and communications only became intermittent when the sub was within a few hundred feet of the surface. We put this down to the location of the topside transducer pole on the port stern quarter and the relatively shallow deployed depth of the Gyro USBL. At that point the ship’s captain’s assessment of the surface currents guided him in stationing the ship for recovery. With up to 2 knots of current, a recovery circle of 600 m in diameter was possible. In every case, the tracking system combined with the captain’s good judgement, put us in the exact right place to spot the sub quickly once it hit the surface.”

Bob Shuman, COO of OceanGate, said, “Sonardyne’s Ranger2 USBL and AvTrak 6 with 6G Terminal Lite software systems allowed our organisation to carry out an extremely successful series of crewed submersible dives during which they observed all three areas of the wreck (bow, stern, and the debris field), captured many hours of high-definition video and several hundred 4k still images, and shared the experience with audiences around the world.

“The entire OceanGate team is extremely grateful for Sonardyne’s support and partnership. The Ranger 2 USBL and AvTrak 6 systems reliably provided crucial comms and tracking data for each dive throughout the expedition.”

Is underwater tracking and communications critical to your next mission? Speak with an expert today.