Article: Measuring the Ocean Beneath Hurricanes with UUVs 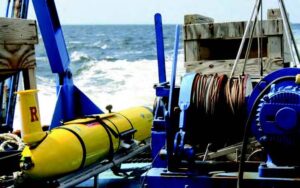 Teledyne Marine, a developer of autonomous and unmanned marine vehicles, has released an article detailing how the company’s Slocum glider UUVs (unmanned underwater vehicles) have been used to measure the influences of ocean conditions and currents on storms in order to improve storm prediction capabilities.

The article provides details of:

Large advances in ocean observing capabilities have been achieved via the use of unmanned observing platforms, which can be used in waters that are too challenging for ships and too hazardous for humans. To find out more, read the full article on Teledyne Marine’s website.