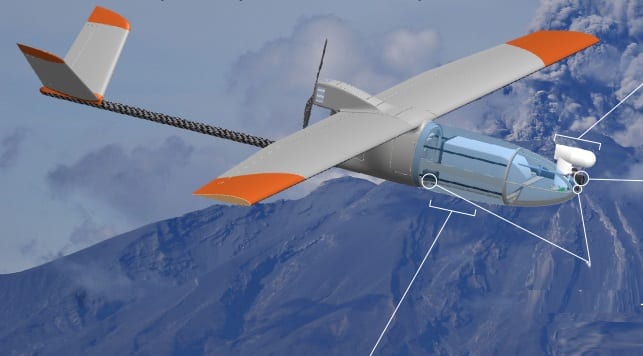 Black Swift Technologies (BST) has announced that it has been awarded a contract by NASA to develop and deliver a purpose-built scientific platform to explore volcanoes in order to improve air traffic management systems and the accuracy of ashfall measurements. BST will deliver to NASA a tightly integrated sUAS solution consisting of an airframe, avionics, and sensors specifically designed to measure selected gases and atmospheric parameters, including temperature, pressure, humidity, and 3D winds as well as more advanced measurements such as particle sizing and trace gases.

“NASA and similar scientific agencies require deliverables with a high degree of accuracy and reliability,” emphasizes Jack Elston, Ph.D., CEO of Black Swift Technologies. “The SuperSwift XT will be designed to collect data in harsh environments and will enhance the performance and utility of NASA’s Airborne Science fleet.”

Member organizations of NASA’s Airborne Science Program can all benefit from the measurements provided by this system in various atmospheric conditions using different sensor payloads which, by design, are easily interchangeable. The sUAS will provide targeted, in situ observations from previously inaccessible regions that can significantly advance NASA’s goal of safe, efficient growth in global aviation by aiding in the collection of scientific data from which predictive Volcanic Ash Transport and Dispersion models (VATD) can be used to inform air traffic management systems.

Leveraging BST’s proprietary Mission Planning Software, scientists can program the SuperSwift in minutes to calculate the area under review and then begin collecting data for immediate analysis and decision making. Flight planning is accomplished with an intuitive tab-driven interface, and mission monitoring and mapping are all done from a handheld Android Tablet loaded with BST’s SwiftTab software. Gesture-based controls enable users to deploy their SuperSwift with minimal training while being able to collect data over geography that is topically diverse.

The existence of a sUAS capable of carrying the necessary instruments routinely through harsh environments adds a new contribution to the calibration and validation of data collected from ground- and satellite-based methods. The flight envelope, concept of operations (CONOPS), and rugged nature of the SuperSwift XT will permit researchers to collect data previously unobtainable through traditional data collection methods. This includes gathering difficult to obtain data sets such as from volcanic plumes shortly after eruption (i.e., particle size-frequency distribution, vertical ash concentration distribution, SO₂ flux, etc.).

The innovations of the SuperSwift XT, including the total sensor suite, can be utilized for scientific research by federal and state public agencies and other state-funded laboratories to collect data on coherent atmospheric structures such as smog, volcano plumes, wildfire smoke, chemical fires, forest humidity, etc. Commercial applications for private industry exist as well, such as utilizing the SuperSwift XT to assess the composition, and relative danger, of chemical fires at refineries or the chemical composition of smokestack exhaust.