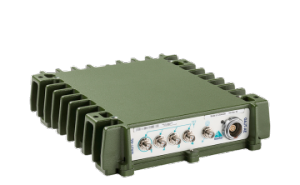 In 2015, Schiebel was evaluating NovAtel’s GAJT antenna as an option for offering anti-jam capabilities on its CAMCOPTER S-100 when an urgent call was received. A Schiebel customer had an immediate operations requirement to combat GPS jamming. The Commercial-Off-the-Shelf (COTS) nature of its GAJT antenna allowed NovAtel to quickly supply Schiebel the requested anti-jam capabilities. In turn Schiebel was able to rapidly deploy the strategically equipped CAMCOPTER to its customer within the requested timeframe.

Peter Soar, Business Development Manager for NovAtel’s Military and Defence group stated, “It was the fast response, followed by the excellent performance of our GAJT anti-jam antenna that has led to Schiebel offering the GAJT antenna as a standard option on their CAMCOPTER S-100.” Soar added, “Every once in a while, timing is on your side. The opportunity to prove our ability to meet urgent supply requests, followed by demonstration of our antenna capabilities in real conditions, has allowed us to positively impact the success of our customer’s business.”

GAJT is a null-forming antenna system which ensures satellite signals necessary to compute position and time are always available. It is available in versions suitable for land, air, sea and fixed installations. It provides anti-jam performance comparable to much larger systems, but at a significantly lower cost. Easily integrated into new platforms, it can also be retrofitted with the existing GPS receivers and navigation systems on existing and legacy military fleets.

Schiebel’s CAMCOPTER S-100 UAS is a proven capability for military and civilian applications. The Vertical Takeoff and Landing (VTOL) UAS needs no prepared area or supporting launch or recovery equipment. It operates during daytime and at night, under adverse weather conditions, with a beyond line-of-sight capability out to 200 km, both on land and at sea. The S-100 navigates via preprogrammed GPS waypoints or is operated with a pilot control unit. Missions are planned and controlled via a simple point-and-click graphical user interface. High definition payload imagery is transmitted to the control station in real time. Using “fly-by-wire” technology controlled by a triple-redundant flight computer, the UAV can complete its mission automatically. Its carbon fiber and titanium fuselage provides capacity for a wide range of payload/endurance combinations up to a service ceiling of 18,000 ft.