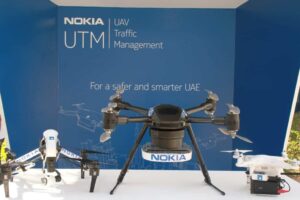 Nokia has announced that it will be showcasing its Unmanned Aerial Vehicle Traffic Management (UTM) concept for the safe operation of Unmanned Aerial Vehicles (UAVs) via LTE at the UAE Drones for Good Award event in Dubai. The real-time demonstration follows an invitation from the Organizing Committee of the UAE Drones for Good Award, launched by His Highness Sheikh Mohammed bin Rashid Al Maktoum, Vice President and Prime Minister of the UAE and Ruler of Dubai. An LTE network is a secure foundation for network operators, governments and public safety authorities to monitor and control drones.

Multiple industry sectors, including healthcare, logistics, agriculture, news and entertainment are embracing the benefits of drones, but carefully managing UAV growth is a challenge for governments and aviation authorities. Nokia’s technology provides centralized monitoring and control of UAVs via an operator’s existing LTE network or dedicated LTE networks run by government or public safety departments.

Technical details at a glance:

Joachim Wuilmet, head of Customer Marketing and Communications, Middle East and Africa, Nokia, said: “LTE enables innovative high-bandwidth services for the telecom industry and beyond. With market-leading LTE expertise, Nokia’s UTM concept for operators and authorities can enable the safe operation of drones as part of the development of smart cities in UAE and around the globe. Nokia innovations such as this are well aligned with our vision to expand the human possibilities of technology in the connected world.”

Amer Abdulraoof, Deputy Coordinator General of the UAE Drones For Good Award, said: “The UAE Drones for Good Award aims at highlighting the latest developments in drones technology and its diverse uses in various sectors, including emergency and logistics services. We believe that Nokia’s technology will help unlock the multifold possibilities of drones technology, ensuring the safe and secure operation of drones across industry sectors.”