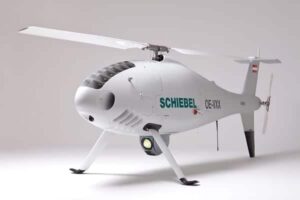 Schiebel is delighted to announce the completion of testing of a new heavy fuel engine for the CAMCOPTER® S-100 UAS (Unmanned Air System). This engine builds upon the extensive experience gained by Schiebel with rotary engine design and development and meets a growing demand for heavy fuel use across both military and civil maritime domains.

Following on from the first Heavy Fuel Engine (HFE) designed and released in March 2012, the Schiebel engineering team has been undertaking extensive testing, redesign and development of a new HFE, adapted from a commercially available rotary engine core to power the CAMCOPTER® S-100.

The head of capability, Chris Day stated that “The CAMCOPTER® S-100 customers demand an HFE able to operate across all climatic environments, from the coldest Arctic areas to the hottest desserts. There are many variables associated with the reliable use of heavy fuel that make these conditions especially challenging; such as variation in fuel quality. Demand for an HFE remains strongest with our Naval customers and so we have spent considerable time developing this new engine to meet the operational requirements and reducing the cost of maintenance”.

The engineering team at Schiebel has designed the aircraft installation to retain backwards compatibility with the existing gasoline engine. This allows customers the maximum flexibility with fuel choice and the broadest operational capability within a multifuel environment. The new heavy fuel engine can accommodate JP-5 (F-44), Jet A-1 (F-35) and JP-8 (F-34) and will be ready for delivery to customers early in 2016.

As part of the redesign weight savings have also been identified with new batteries, an upgraded exhaust system and a completely new engine control unit to manage the fuel flow and engine power output. The operational performance of the CAMCOPTER® S-100 is unaffected by the new engine retaining the standard 6 hour endurance with full operational payload and an optional 10 hour endurance with an auxiliary fuel tank. Schiebel expects that with ongoing development this endurance could be extended further.

The owner and chairman, Hans Georg Schiebel stated “One of the primary aims of the HFE development programme has been to help our customers by improving the engine MTBO (Mean Time Between Overhauls), greatly reducing costs and the overall logistics burden when deployed on extended maritime missions or operations in remote areas.”

Hundreds of operational testing hours have already been completed with the latest engine and refinements continue to push the engine to new performance boundaries.