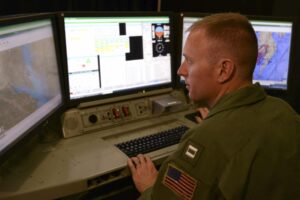 In early September, the UCLASS team integrated the latest iteration of Common Control System (CCS) software into the next-generation unmanned effort, laying the groundwork for potential use across multiple domains –airborne, land and subsurface.

“One of the premises that started CCS was not rebuilding the software that we needed for every UAS every time,” said Jeff Davis, CCS team lead. “We focused on using existing products that we have within the Navy inventory to provide that first baseline going forward for the next UAS, in this case UCLASS. As a result, this allows development investment to focus on the future — the new capabilities that you can bring to the fleet.”

This new software version is the first to provide an unmanned command and control capability using the latest Navy Interoperability Profile (NIOP) standards. The NIOPs allow control systems to talk to and share data with multiple air vehicles, Davis said.

His team leveraged support from other unmanned programs, specifically Triton and Fire Scout, to build baseline software for UCLASS. They are currently testing this software with an air vehicle simulator based on Triton.

“This iteration forms the baseline for all future UCLASS control software,” said Cmdr. Wade Harris, Control System and Connectivity (CS&C) lead for UCLASS. “These early lab tests will help inform us as we move forward with development and eventually test with the air vehicle.”

As the lead systems integrator, the Navy is spearheading the CS&C and carrier segments, while working with industry to lead the design and development the air system segment.

“One of the unique aspects of the UCLASS program is that we have to pull all of the different segments together,” said Ron La France, UCLASS integration lead. “We have the control station and connectivity segment, carrier segment, along with the air system segment. All three of those have to be integrated and tested at the system level and that is what we will do here in this lab.”

These government-led segments require a high-level of coordination. The UCLASS program team is working with 72 programs of record, 22 program offices, six program executive offices and three systems commands, he said.

UCLASS will be the first-ever, forward-deployed, carrier-based unmanned air system designed to provide persistent intelligence, surveillance, reconnaissance and targeting with precision-strike capability. An early operational capability is anticipated in the 2020-2021 timeframe.