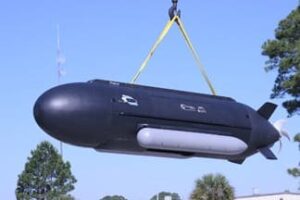 R&D Magazine bestowed one of its coveted R&D 100 Awards on Proteus co-developers Battelle, The Columbia Group and Bluefin Robotics.

Proteus, a new class of underwater vehicle that is unique in its ability to operate in either manned or autonomous mode, has been recognized as one of the best technical products of the year. With large payload capacity, long range, high endurance, and advanced autonomous behaviors, Proteus provides capabilities unavailable in other unmanned underwater vehicles (UUVs).

The awards, known as the “Oscars of Innovation” in the science and technology world, recognize the most significant scientific accomplishments and products of 2012. Battelle, along with the national laboratories it has a role in managing for the U.S. Department of Energy, won a total of 17 awards, bringing its historical tally to 298.

“We’re proud that this promising new vehicle has been recognized for the unique maritime technology and engineering accomplishment that it is,” said Steve Kelly, President of National Security at Battelle and the Chairman of the Board for Bluefin Robotics.

Combined with its long range and large cargo capacity, this dual capability provides a highly flexible undersea vehicle that can transport divers or deliver payloads at distances of hundreds of miles without human intervention. Based on the heritage of the Swimmer Delivery Vehicle (SDV) built by The Columbia Group and proven in operation with Special Operations Forces Teams, Proteus incorporates cutting edge autonomy software and high-energy-density batteries by Bluefin Robotics to dramatically expand the capabilities available to users of underwater vehicles.

The vehicle can be used for a variety of tasks including: payload integration, test and comparison; advanced autonomy development; long range and stand-off experiments; transporting and installing equipment on the sea floor; inspecting undersea infrastructure such as bridge pilings, undersea pipelines and oil rigs; and transporting divers and cargo.

Compared to conventionally-sized UUVs, Proteus markedly reduces the need for frequent launch and recovery for any of these applications and can carry much larger payloads or cover much greater distances than has previously been possible. In applications such as undersea inspection that now depend on remotely-operated vehicles (ROVs), Proteus can reduce the need for costly surface support ships because it can operate autonomously.