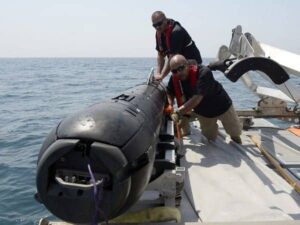 The U.S. Navy has deployed the MK18 Mod 2 Kingfish underwater unmanned vehicle for operations in the 5th Fleet area of responsibility, following more than 30 sorties over 15 days of mock deployment testing in the Gulf of Mexico, the Navy announced June 20.

Kingfish is an autonomous underwater unmanned vehicle (UUV) used by the U.S. Navy for mine detection missions with an improved endurance and area coverage rate that replaces the in-theater Swordfish system.

These UUVs are pre-programmed and designed to scan waters for targets or threats while offering sailors faster post-mission analysis using the Navy’s Mine Warfare and Environmental Decision Library (MEDAL) and Command Operations Interference Navy (COIN) systems.

Test lead Amanda Mackintosh said the mock deployment began May 6 and was conducted in areas over 20 nautical miles from the Panama City Beach shoreline, launching UUVs from an 11-meter Rigid Hull Inflatable Boat which is how the system will be used in theater.

“Missions went very smoothly. The mock deployment was conducted in realistic environments and where there was greater risk reduction for deployment,” she said. “We didn’t experience any vehicle failures and we ran three and sometimes four vehicles for eight hours per day for the 15 days.”

NSWC PCD, a field activity of the Naval Sea Systems Command, employs more than 1,300 people and provides innovative, technical solutions to complex problems specifically in the areas of littoral and expeditionary warfare.