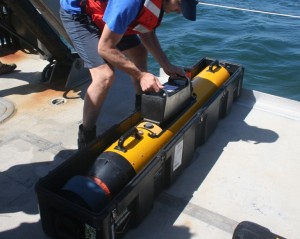 Bluefin Robotics, a leading provider of Autonomous Underwater Vehicles (AUVs) and related subsea technologies, announced that the US Navy has granted a safety approval for its standard 1.5 kWh Subsea Battery for use with the HAUV system including transport aboard Naval aircraft. The approval validates Bluefin’s mature and proven design for subsea power solutions and is received as the company significantly increases production rates for this and similar battery systems.

“We are very pleased with the results of the testing,” said Dr. Richard Wilson, Director of Power Systems at Bluefin Robotics. “The approval adds to our safety reputation for subsea battery technology and highlights the quality and effort we put into all our battery systems, both for our military and commercial clients.”

In October 2012, the Naval Surface Warfare Center, Carderock Division (NSWCCD) performed an updated series of lithium battery safety tests, including those addressing both performance and safety. Safety tests were conducted primarily in accordance with NAVSEA TM S9310-AQ-SAF-010, but also with some input from NAVSEA TM SG270-BV-SAF-010. Results concluded that the battery delivered a consistent amount of energy without significant capacity fade, and safety devices were highly effective with respect to voltage, current, and temperature.

When the battery was cycled under high current conditions, it experienced high temperatures, which activated the safeties and prevented the battery from further charging, preventing high temperature conditions. Safety testing of the battery produced predictable and expected results for a li-ion battery utilizing a LiCoO2 cathode in a pouch cell format. In addition, the battery management system was highly effective in preventing unsafe operating conditions. Testing was performed by NSWCCD’s Materials and Power Systems Branch, Code 616.

Bluefin Robotics has been designing, manufacturing and fielding subsea batteries and custom power solutions for over ten years and has produced over 1,000,000 watt-hours of energy. Bluefin batteries have powered autonomous underwater vehicles, remotely operated vehicles, manned vehicles and other subsea platforms and structures.