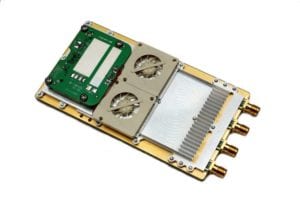 Radio transceivers are devices that combine a transmitter and a receiver into a single unit, thus permitting bidirectional communications. They may be used by UAVs and unmanned vehicles to communicate with each other or with a ground control station (GCS). Control signals, telemetry, and payload data such as sensor readings and streaming video may all be transmitted or received by drone radio transceivers.

UAV transceivers may also be simple transponders, broadcasting information such as position, velocity and identification in response to receiving an interrogation signal. These transponders are used for ADS-B and drone applications such as military IFF (Identification Friend or Foe) and detect-and-avoid (DAA).

UAV radio transceivers can operate on a variety of frequencies:

In addition to line-of-sight issues, the range of a radio transceiver may depend on the amount of RF energy that can be supplied for transmit power, as well as the gain and design of the antenna. The data rate of a drone transceiver can be improved by using multiple antennas, but may not be feasible for smaller UAVs that have a limited SWaP (size, weight and power) budget.

Drone radio transceivers may be software-defined, providing greater flexibility and allowing them to be quickly and easily reprogrammed over the air to meet changing communications requirements without needing to change hardware. SDRs (software defined radios) typically enable advanced networking features such as MIMO (multiple input, multiple output) and IP Mesh facilities that allow for the creation of fluid self-healing networks.