Find suppliers and manufacturers of Mode A, Mode B, Mode S and ADS-B transponders for unmanned aircraft (UAVs, drones, RPAS).

Transponders for Unmanned Systems and Robotics

Lightweight, Miniature and Microtransponders for Drones, UAVs and RPAS 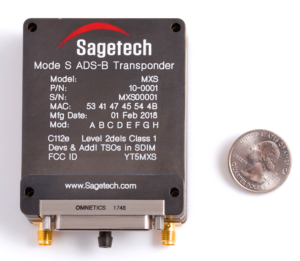 A transponder (portmanteau of transmitter-responder) is a device that receives an RF (radio frequency) interrogation signal and in response, transmits a different signal. Transponders are used in both manned and unmanned aviation to provide information about an aircraft.

Military aircraft will use IFF transponders to provide an IFF (Identification Friend or Foe), transmitting a coded identification signal that identifies them as non-threatening. Civil aviation also uses transponders to identify individual aircraft, allowing air traffic control to track all flights within a particular airspace, resulting in improved safety and efficiency.

Transponders are used by drones to provide collision avoidance and situational awareness capabilities, helping to maintain safe distances between a drone and other manned or unmanned aircraft.

Transponders are especially important for smaller drones that may not be visible to main air traffic control radar. Recent advances in miniaturization and electronic technologies have allowed compact and lightweight miniature transponders and microtransponder to be manufactured for even the smallest UAVs.

Standard communication formats of aviation transponders are known as modes, and are generally differentiated by the spacing between transmission pulses. Modes 1 to 5 are designated for military use, and there are also a number of other modes used by civil aviation transponders.

Mode A receives an interrogation request and replies with the aircraft’s predefined four-digit identification code.

Mode C augments the Mode A broadcast with an additional pressure altitude reading, which is provided by either an integrated or external altitude encoder.

Mode S is a Mode A- and C-compatible but significantly enhanced mode, which is capable of interrogating one aircraft at a time to reduce transponder workload. It uses a more robust communication protocol that can transmit a wider variety of information, as well as reducing frequency congestion and improving position accuracy.

Drone transponders can also be used to broadcast ADS-B (Automatic Dependent Surveillance—Broadcast) information. ADS-B is a tracking technology being considered as a potential replacement for the above secondary surveillance radar air traffic control modes, and may be a key component of future UTM (unmanned traffic management) systems.