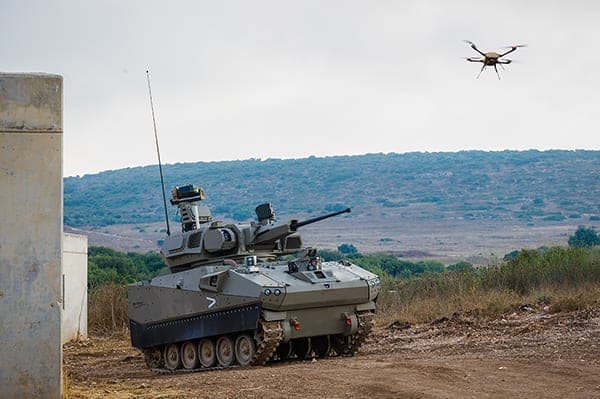 Elbit Systems has announced the launch of a new fully-autonomous multi-rotor vertical take-off and landing (VTOL) unmanned aerial system (UAS) designed to be rapidly deployed from any combat vehicle, thus transforming it into an effective intelligence gathering platform. MAGNI is the latest addition to Elbit’s portfolio of multirotor VTOL UAS, which also includes the THOR and NOX micro-UAS.

The compact and lightweight MAGNI UAS weighs 2.5 kg and can be launched in less than a minute, providing enhanced situational awareness for mobile forces at squad, platoon and company levels. It can be operated by a single user within the vehicle, generating over-the-hill visual intelligence both during the day and at night, and seamlessly feeding target information to command and control systems.

The MAGNI platform includes a thermal payload, a communications suite (dual S-Band or LTE), automatic coordinate tracking capabilities, and a built-in interface with Battle Management Systems (BMS). The UAV has a range of up to 3km while carrying a payload of up to 350g, and is capable of a maximum operational altitude of 4000ft and a flight endurance of 30 minutes.