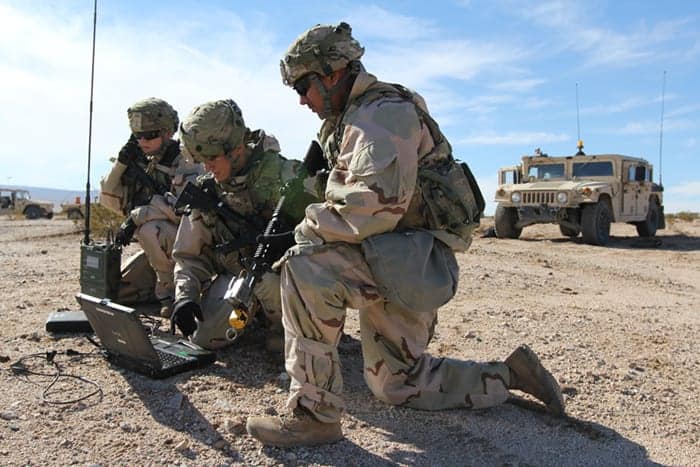 The U.S. Army has announced that its 3rd Brigade Combat Team, 1st Cavalry Division (3/1 CD) has trialled a new prototype that complements electronic warfare systems to combat enemy drones. The trials took place at the Army’s Natonal Training Center in the Mojave Desert.

Using the Army’s enhanced cyber-enabled Counter-Unmanned Aerial System (C-UAS) capability, Soldiers with the 3/1 CD were able to detect and counter common small drones during their training. The new prototype alerted Soldiers to the presence of a drone and provided a means to target it, for protection across the brigade.

This integration of cyber-enabled prototypes with existing signal, intelligence and electronic warfare capabilities allowed the Soldiers to fix on a target and engage their fires cell, said Capt. Christopher Packard, electronic warfare and cyber electromagnetic activities chief for the 3/1 CD.

“That’s the goal right there, to reach the commander’s end state and to meet his intent for lethal targeting – those are some of the main concepts to focus on,” Packard said. “I think we’ve done well here, getting intelligence information as it’s passed…that we can use for targeting. I’m looking forward to seeing where this goes in the future.”

While the Army has a wide variety of solutions to counter drones, the new capability focused on bringing precision cyber techniques to bear as a complement to those other C-UAS systems. A small group of software developers within the U.S. Army Cyber Command (ARCYBER) and the Defense Digital Service custom-built software, developed a user-focused design and modified commercial off-the-shelf equipment to create pilot systems in early 2018.

Growing demand for a more robust and scalable solution generated a need for a rapid prototype. The Defense Digital Service completed the specialized software of the pilot system and transitioned development of a prototype to the Army Rapid Capabilities and Critical Technologies Office (RCCTO), which crafted an acquisition approach that integrated software and hardware. Working with Tobyhanna Army Depot and ARCYBER, RCCTO launched prototype production in November.

The integrated team delivered the new cyber C-UAS capability to the 3/1 CD in less than three months. The new system is an interim solution that will continue to evolve as the Army applies direct Soldier feedback to improving design and performance. The integrated team is incorporating feedback from the unit’s rotation at the National Training Center (NTC) at Fort Irwin, California, which took place Jan. 7-25, as they develop a phase two prototype, to be delivered later this summer.

“This effort allowed the 3/1 CD to receive valuable C-UAS training ahead of their upcoming mission set,” said Jack Dillon, RCCTO’s cyber lead. “It also provided critical feedback that we are already feeding into the next version.”

“The RCCTO and Tobyhanna helped out with taking it from an advanced prototype and turning it into an engineering design model,” said 1st Lt. Aneesh Patel, with ARCYBER’s Cyber Solutions Development Detachment – Georgia, 782nd Military Intelligence Battalion, 780th Military Intelligence Brigade. “We designed our own hardware and schematics, but what we didn’t have was the proper ability to scale, and I think that’s important in a bridging strategy and for any prototype.”

The ability to turn a concept into a small package of operational prototypes for use by a unit required a proper yet flexible acquisition strategy that would also set the foundation for increased production later. In turning a concept into an operational prototype, Tobyhanna had to put together a complete drawing package using items from the depot and create the prototype while keeping to strict quality standards.

“We must do everything per Army regulations,” said Joe Lynn, a project manager for Tobyhanna Army Depot, located in Pennsylvania. “So, once everyone came on-site and saw what we do here, and that we’re basically a one-stop shop from concept to combat, it brought a better understanding.”

The process also required constant communication. This came in the form of coordination on the ground during the NTC rotation with the unit’s electronic warfare Soldiers, and during biweekly technical and synchronization meetings involving Tobyhanna, ARCYBER, the Defense Digital Service and RCCTO. Tobyhanna also hosted multiple face-to-face meetings to expeditiously solve technical questions and challenges. On the project management end, RCCTO worked in parallel to address typical program, legal and budget reviews. Of particular note, in addition to constructing the prototype from an engineering concept, the RCCTO, ARCYBER and Tobyhanna put in place a training plan for the 3/1 CD.

This rapid approach unfolded on the ground at NTC, as Soldier input went directly to engineers on-site so that they could make changes quickly, sometimes within hours.

“Having that agility really made it possible to have mission success and also to get a lot of feedback to better the system,” Patel said. “Being a newer system and a new tool for a maneuver unit, there are going to be a lot of things we don’t know as [cyber] engineers, and a lot of their specific needs for the capability that may not have gotten through to us. So being out there was very important to this and any other project like it.”

For example, to enhance the overall training experience, RCCTO, Tobyhanna and ARCYBER were able to quickly design and deliver custom mounting systems consisting of cables, brackets and other hardware for vehicle and fixed-site implementation during the prototype deployment at NTC. This fixed-site configuration, part of the unit’s tactical operations center (TOC), was a new design put together days before the unit received it, and proved paramount to Soldiers’ effectiveness in using the system.

“We fielded a completely new configuration kit, the TOC kit,” said Capt. Adam Schinder, commander of the Expeditionary Cyber Support Detachment, 782nd Military Intelligence Battalion. “It was perhaps the most successful implementation of the C-UAS solution. As a result of being statically configured and continuously monitored and plugged in, the unit found the TOC kits extremely successful.”

During the 3/1 CD’s rotation, ARCYBER embedded five Soldiers with the NTC’s opposing force who had the ability to attack the unit with their own “enemy” drones, thus providing more realistic training.

“The system was able to give the supported unit situational awareness of drones that threatened the formation across a wide front,” Schinder said. “It alerted the unit to the presence of the drone, and then it provided automated force protection at the request of the operator. Simply put, we flew the drones, we deployed the devices and we successfully defeated the threat.”

This phase-one cyber precision drone detection system will be followed by an upgraded phase-two version slated for delivery to the U.S. Special Operations Command for an operational assessment this summer. Phase two will maximize the capability’s operational life span by incorporating multiple software updates to improve performance. Both efforts will begin to help inform the Army’s overall requirements for cyber-based C-UAS.

Already, RCCTO and ARCYBER are coordinating with partners in the C-UAS community to optimize investments and share technical cyber approaches. They are also advancing new versions that are software-based for easy portability into mounted and dismounted C-UAS platforms.

“Ultimately, the momentum gained through this partnership will increase cyber integration into equipping efforts within the multidomain operations paradigm,” Dillon said. “It’s a great example of the type of partnership that can produce meaningful operational prototypes while setting conditions for transition to programs of record.”