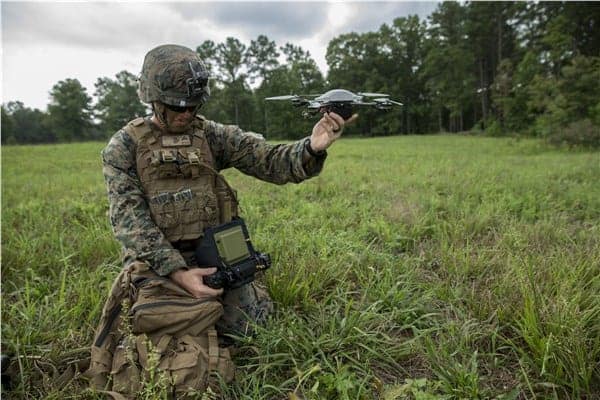 The U.S. Marine Corps has announced that it has started equipping infantry units with small unmanned aircraft systems (sUAS) quadcopters to bring greater situational awareness to troops on the ground.

“The infantry battalion needs small UAS because it makes the most dangerous weapon – a Marine and his rifle – that much more lethal,” said 1stLt Joseph Paoletta, SUAS program manager at 2nd Battalion, 7th Marine Regiment (V27). “The advent of widespread use of both commercial off the shelf and military-grade UAS by our adversaries necessitates we maintain the same level of capability.”

Paoletta said V27 was already using fixed-wing ISR UAS in support of intelligence collection; however, it was largely relegated to the battalion level.

“The ease of use and the ability to have an InstantEye or PD-100 in the air in less than two minutes immediately improved the small unit capabilities to provide organic collection and force protection in an expeditionary manner,” he said.

He said by providing the small unit leader, whether it be the company commander, platoon commander, or even squad leader with immediate reconnaissance of a given area, they increase their situational awareness and their ability to plan and adapt to the mission set.

Paoletta said they’ve had a 100 percent success rate of employing VTOLs during their Combat Readiness Evaluation.

He explained that during an urban environment exercise at Marine Corps Air Ground Combat Center Twentynine Palms, California, Fox Company, while “under attack,” utilized the PD-100 to positively identify hostile forces located within the “town” while remaining out of sight. This confirmation allowed the company to successfully assault the town. He said squad leaders used the PD-100 to view courtyards and had instantaneous feedback on potential IEDs and hostiles.

“To paraphrase Gen. Neller, ‘we equip the Marine with a tactical, enabling machine’,” said Col. John Neville, PMA-263 program manager. “I’m extremely proud of our team at how quickly they tackled numerous processes and contracting actions to expedite the urgent needs request so we could get these mission-enabling and life-saving systems into the hands of the warfighter.”