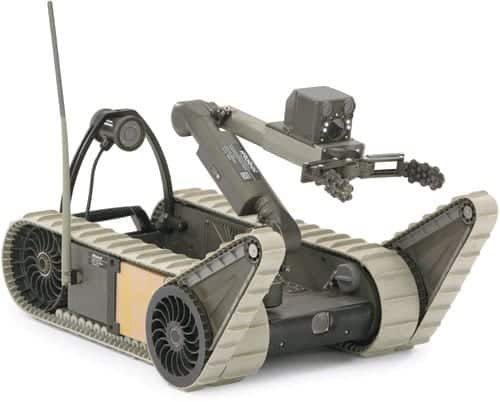 Endeavor Robotics has announced that it has received an order for 32 of its battle-proven Small Unmanned Ground Vehicles (SUGV) from the United States Armed Forces. To date more than 1,000 SUGV robots have been fielded worldwide to domestic and international defense, law enforcement, and industrial customers, however this is the first large scale US DoD fielding of the system.

The SUGV is equipped with the uPoint Multi-Robot control system, which greatly decreases on-robot training time by leveraging ubiquitous technology and familiar tablet-based user-interfaces. uPoint has been successfully integrated across the family of man-transportable Endeavor Robotics products, including the FirstLook, SUGV, and PackBot.

“All of us at Endeavor Robotics are singularly focused on the development, delivery, and sustainment of life-saving robot technology. The delivery of 32 SUGVs equipped with our uPoint Multi-Robot Control System advances the entire install base in terms of interoperability across the family of Endeavor Robotics’ systems. These systems will augment the approximately 1,000 SUGVs already in use by our Armed Forces,” said Sean Bielat, CEO. “We could not be more proud of the American warfighter and remain a dedicated partner to the United States Armed Forces.”

The Endeavor Robotics SUGV has been in service across the United States Armed Forces since 2009, providing dismounted operations with a back-packable, easily deployable, rugged less than 20 lb robot. SUGV meets IP67 ratings, operates in all environmental conditions, integrates multiple sensors and hardware for increased capabilities, climbs and descends stairs, provides dexterous and robust manipulation and lift/inspection capabilities while also being capable of extending operational range through mesh networking with other deployed Endeavor systems.

The Endeavor Robotics uPoint Multi-Robot Control System consists of an Android-based, rugged, tablet controller and Persistent Systems, LLC, MPU5 Radio network. The integration of the mesh networking with Endeavor Robotics robots is a force multiplier for warfighters by significantly increasing the distance of unmanned ground operations and enabling operators to control or observe multiple robot assets through a common controller interface.