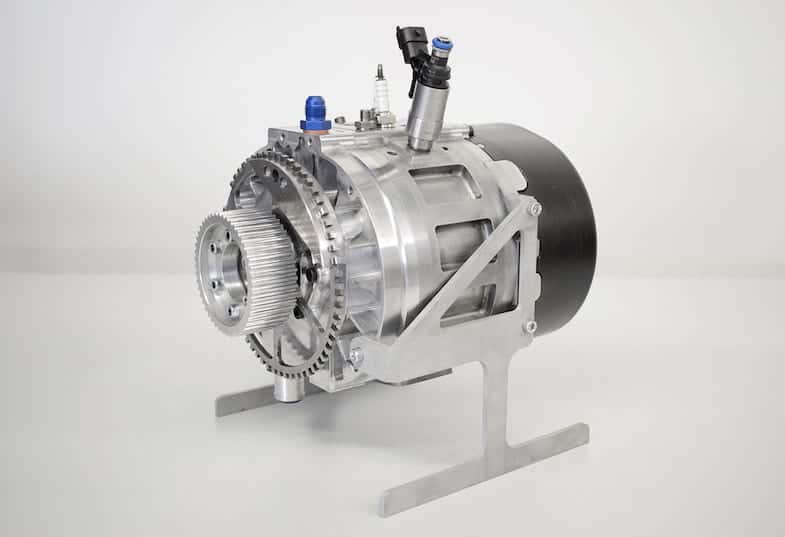 Engine manufacturer 3W-International has expanded its range of drive products for unmanned aerial vehicles (UAVs) with its new 3W-180 SRE Hybrid Wankel engine, which can be fuelled by petrol or kerosene.

“In the past, many interested parties at trade fairs and congresses have asked us about Wankel engines,” recalled Karsten Schudt, managing partner of 3W-International GmbH. Because of this, Schudt and his development team decided to expand the company’s product lines with Wankel engine technology.

“We wanted a high-quality, fuel consumption-optimized engine which would demonstrate an outstanding power-to-weight ratio”, continued Schudt. The 3W-180 SRE Hybrid has 180 ccm and as a short engine weighs 6.8 kg. In the high power version, at 7500 rpm it delivers 38.5 hp (nominal power 28 hp at 6000 rpm). This results in a power-to-weight ratio of 5.66 hp/kg, with a fuel consumption of 340g/KW at full load.

The engine can be fitted with an electric motor (starter generator), increasing the total weight to 9.5 kg. The generator also charges the super capacitors which turn the Wankel engine into a hybrid drive. Super capacitors are well-suited to hybrid applications in aviation due to their weight and fast charging and discharging behaviour.

The hybrid Wankel engine can feed 15KW, depending on the capacity of the storage system, into the system for a time (for example, 30-60s). This additional power can be used when starting a helicopter or for the acceleration of a fixed wing aircraft.

The 3W-180 SRE Hybrid is equipped with two independent cooling systems. A water cooling circuit undertakes the cooling of the engine housing, while a second oil cooling circuit undertakes the internal cooling of the piston. This is a fundamental prerequisite for a drive system in aviation applications for which continuous power is also a fundamental prerequisite. Here the thermal stability, which gives added value to the 3W-180 SRE Hybrid, is of crucial importance.

In a further expansion stage, the Wankel engine can also be equipped with two drive pulleys. Through the doubling of the swept volume, the power of the naturally aspirated engine is doubled to 76 hp in the high performance variant with a short weight of 10.5Kg. This engine variant is also intended as a hybrid version. In the future, a variant with a turbocharger which is primarily intended for height compensation will also be offered.

“We can also supply the Wankel engine as a complete drive unit similar to our two-stroke engines. This means that the customer receives the engine equipped with all additional systems completely in accordance with his individual requirements,” explained Schudt.

In accordance with the engine philosophy of 3W-International, the 3W-180 SRE Hybrid can be used as a petrol or as a Heavy Fuel (HF) engine. As an HF engine, the fuels JET A-I, JP-5 or JP-8 can be used. “For the HF versions we provide high performance fuel injection which leads to a further reduction in fuel consumption,” explained Schudt. For petrol operation, intake manifold injection is provided for the fuel injection.

“We are looking forward to being able to introduce a new engine to our customers which, from a technological perspective, offers unparalleled advantages in terms of fuel consumption, drive performance and reliability,” added Schudt.