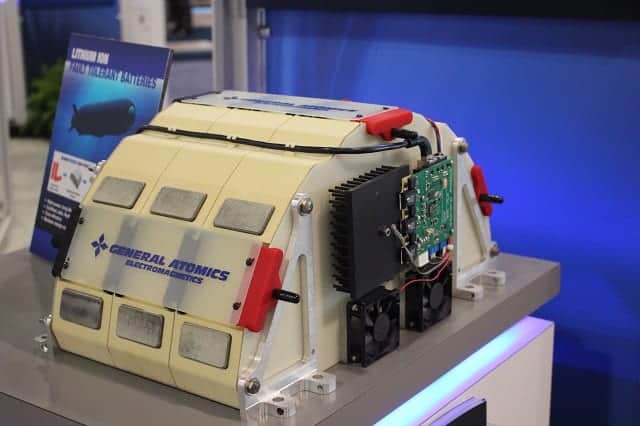 General Atomics has announced that its Electromagnetic Systems group (GA-EMS) has been awarded a contract to provide its Lithium-ion Fault Tolerant (LiFT) battery system for the Semi-Autonomous Hydrographic Reconnaissance Vehicle (SAHRV), a small, portable unmanned underwater vehicle (UUV). GA-EMS is part of a team working with the Department of Defense to design, fabricate, deliver, and conduct at-sea testing of the LiFT battery system for use on the SAHRV platform. The SAHRV UUV is intended for shallow water surveillance to scan, detect and identify mines and other obstacles.

“Our modular, flexible LiFT battery systems are designed for integration into a wide range of platforms, and have been successfully tested for use on a manned submersible,” stated Scott Forney, president of GA-EMS. “The goal of this new contract is to provide a safe, fault-tolerant, high energy density system that achieves the safety certification approvals required for an unlimited ship carry-on capability and to provide the energy needed to maximize mission assurance whenever and wherever the SAHRV is deployed.”

GA-EMS’ LiFT battery system is designed for use on manned and unmanned underwater vehicles and platforms. LiFT’s single cell fault tolerance prevents uncontrolled cascading cell failure. This ensures the safety of on-board personnel and keeps systems operational through faults to enable mission completion. LiFT has been approved for use and classified by DNV-GL (Det Norske Veritas Germanischer Lloyd).