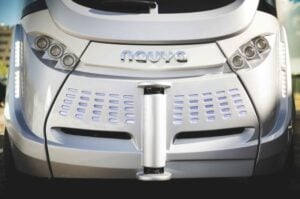 The fully autonomous, driverless and electric ARMA shuttles will be subject to two-phase testing. The PostBus vehicles will initially be tested on a private, closed site through the spring of 2016. Once pilot-testing is authorized, the two shuttles will be able to run on public roads in the Swiss town of Sion, the capital of the Canton of Valais, and carry passengers in autonomous mode.

NAVYA’s vehicle has already travelled on the open road for the very first time during the Intelligent Transport Systems World Congress (ITS) in Bordeaux. The ARMA will transport up to fifteen people at a maximum of 25 km/h through the streets of the capital of Valais.

NAVYA ARMA steering systems make use of a multitude of technologies simultaneously: GPS RTK navigation devices, stereovision cameras, inertial navigation systems and odometry, in addition to LiDAR. Thanks to its sensors, NAVYA ARMA can position itself to within a few centimeters of its desired target and can identify all types of obstacles on the road – fixed, such as posts, and mobile, such as pedestrians – and signage, in both daylight and at night time.

“This is a turning point for our company and for autonomous technology,” said Christophe Sapet, President at NAVYA in Lyon. “The system has been tested and now will be operational for the public. Velodyne LiDAR is key to the 3D vision system for the ARMA electric and autonomous shuttles.”

“The NAVYA ARMA shuttles, and their deployment by PostBus, represent a major milestone for autonomous transportation,” said Erich Smidt, European Sales Director Velodyne LiDAR. “What is most remarkable is how these various technologies have matured and converged in a solution that is safe, convenient and available to all. Velodyne LiDAR is the very essence of proven technology, having collectively logged millions of hours of use time in virtually every type of terrain and weather condition. A new era truly is beginning.”

ARMA shuttles will enable transport specialists to look into how they integrate into public areas and enable them to test innovative modes of transport. The aim is to offer an additional form of transportation on current routes to cover the needs of all users – in particular, those who live in areas not currently served by the public system.