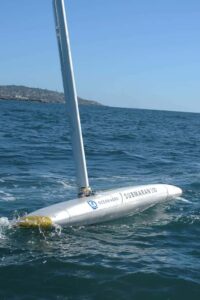 Ocean Aero, a developer of autonomous ocean systems, has announced that the Submaran™ unmanned underwater and surface vessel (UUSV), has been selected as a winner in the Aerospace, Security, & Cyber Technologies Category at CONNECT’s 28th Annual Most Innovative New Product Awards.

Ocean Aero was selected for their work on the Submaran, a unique, highly ruggedized, and completely powered by wind and solar-energy ocean vessel. The vessel’s self-powered payload can be configured with a wide variety of sensor and observational systems to provide essential information to science, academic, commercial and government organizations. The Submaran is easy to deploy and is the only unmanned, underwater, surface vessel of its type capable of both extended surface and subsurface operation.

CEO and President, Eric Patten, gave a quick speech at the awards ceremony in December and thanked his tireless and outstanding team of engineers and support staff. Patten later noted, “Ocean Aero is incredibly honored to receive this award, especially considering the competitive field of finalists.” He added, “This award validates the massive potential of the Submaran for the Ocean Aero team.”

CONNECT, a premier innovation company accelerator in San Diego that creates and scales great companies in the technology and life sciences sectors, annually hosts this prestigious competition, which begins in each year in the spring and culminates in the awards ceremony, to recognize and laud ground-breaking products released within the last 18 months from San Diego-based innovation companies.