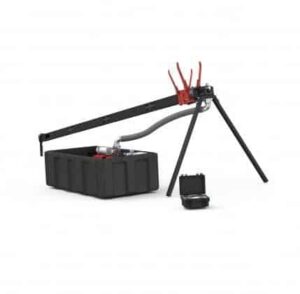 UAV Factory, a developer of unmanned composite airframes and subsystems, has announced the release of their 12 kJ pneumatic catapult. Building on the success of the 6 kJ pneumatic catapult, the new catapult offers the same reliability and ease of use, but now has a UAV takeoff weight of up to 60 kg.

As with the original catapult, which has been used by numerous manufacturers around the world with UAV’s of varying sizes, the new version offers the same versatility. The catapult features a rugged aluminum structure, which can be disassembled into a man-portable transportation case. Designed for thousands of launches, the catapult can be quickly assembled in the field and offers 24 m/s maximum speed. Konstantins Popiks, CTO of UAV Factory, commented “This is the most powerful and mobile catapult of its kind in the world”.