Launch and Recovery of Drones and UAVs

The launch and recovery of a UAV are potentially the most critical and demanding phases of the aircraft’s operation. For the largest fixed-wing UAVs, these operations will be limited to takeoff from and landing on a runway of sufficient length, constructed either on suitable ground or the deck of an aircraft carrier. Small to medium-sized fixed-wing aircraft have a wider variety of options, and multirotor/VTOL UAVs require very little space and usually no equipment at all to take off. 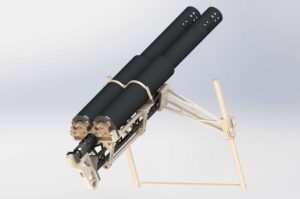 Fixed-wing UAVs generally need to be accelerated to a minimum controllable airspeed before achieving takeoff. Various methods can be employed that do not require the use of a fixed runway or large cleared area. The smallest and most lightweight UAVs can be thrown by hand, or launched with a handheld device, whereas larger aircraft will require a fixed rail launcher.

UAV catapult launchers may be pneumatic, hydraulic or bungee-assisted. Pneumatic catapult launchers use compressed air or other gases to accelerate a launching cradle along the launcher. A compressor is needed to pressurize the gas, requiring a power supply and potentially being bulky and difficult to transport.

Hydraulic UAV catapults use a two-compartment cylinder containing oil and compressible gas separated by a piston. Pumping the oil causes the piston to compress the case, which stores energy for launching the UAV. Like pneumatic UAV catapults, hydraulic UAV launchers also require a power supply to operate.

Bungee-powered UAV catapults are simpler than hydraulic or pneumatic launchers, using energy stored in elastic cords. The cord may be stretched manually or by means of an electric motor. Although they are the quietest and cheapest solution, they are limited to smaller UAVs.

If a surface is available that is unsuitable for the smaller, more delicate landing wheels of a UAV (due to long grass, gravel, unevenness or other obstructions), but sufficient for a larger, more durable vehicle such as a truck to be driven along it, a launch may be possible from that vehicle

The UAV is typically held in a fixed cradle on top of the truck, angled upwards at an angle that gives maximum lift. When the truck has been accelerated to takeoff speed, the cradle is released and the UAV lifts directly upwards into flight.

UAVs may also be launched from the deck of a ship using catapult launchers, or from larger aircraft in flight.

Parachute systems are a common recovery solution for UAVs, assuming sufficient space and carrying capacity to contain the packed parachute and deployment mechanism. Drone parachutes need to deploy to a sufficient distance so that they do not get entangled, especially on multicopters which may tumble on rotor failure due to inherent instability.

Drone parachute systems can be automated or pilot-triggered. Automated parachute systems need to detect the conditions required for deployment quickly and then trigger rapidly, especially those intended for flight over people. They will typically monitor for conditions such as freefall acceleration as well as low voltage. 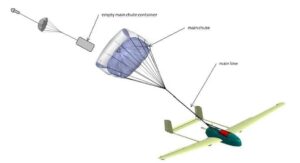 UAV parachutes may be deployed either passively or ballistically. Passive systems are usually used on fixed-wing UAVs that are in constant forward flight. They are deployed by opening a hatch and letting the wind catch a smaller parachute that drags out the main parachute deployment bag.

Ballistic UAV parachutes depend on either a mechanical spring or a gas such as CO2 to deploy the parachute. Spring systems are simple and lightweight, but are limited in the amount of energy that can be stored. Gas-powered systems exert a lot of force, but due to the pressurization, cannot be transported on commercial aircraft. Some gas-powered systems use a pyrotechnic charge, which again limits their use due to certain regulations.

Other methods of recovering drones include net systems suspended between poles and attached to a system of purchase lines and shock absorbers. These are simple but risk damaging the UAV due to sudden deceleration. They are also unsuitable for UAVs with unshrouded propellers, as entanglement of the net may lead to damage of the net or to the propellers and engine of the aircraft.

To minimise the effect of impact with the ground or a body of water, UAVs may also be fitted with inflatable airbags or crushable “crumple zone” structures.