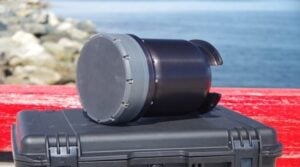 Kraken Sonar Inc., a manufacturer of Synthetic Aperture Sonar (SAS) technologies, has announced that its wholly-owned subsidiary, Kraken Sonar Systems Inc. has introduced AquaTrak™, a next generation Correlation Velocity Log. The product was launched at the Ocean Business conference in Southampton, United Kingdom.

The Doppler Velocity Log (DVL) has traditionally been the standard choice for integration into UUV navigation systems. Until now Correlation Velocity Logs (CVL) have not affected this domination of the marketplace because of the high level of signal processing required for correlating pairs of signals in CVLs. However, recent advances in low power electronics and advanced acoustic correlation signal processing techniques now enable CVLs to offer a superior price and performance value proposition over existing DVLs.

CVLs offer many advantages over DVLs, since they can achieve high accuracy at low velocities even during hover manoeuvres. DVLs use narrow beam widths, while CVL transmitters have wide beam widths. This gives CVLs the potential to use lower frequencies thus permitting operation in deeper water; increased accuracy; reduced power requirements for the same depth and smaller form factors.

Kraken’s AquaTrak™ Correlation Velocity Log provides both long range navigation and high resolution accuracy. The highly flexible and modular design allows the unit to be used in a standalone configuration or as part of an Integrated Navigation System.

A CVL measures a two-dimensional displacement vector between two receiver channels for successive pulses, so that the corresponding velocity measurement is generated by the displacement divided by the time interval between pulses, with no need for a speed of sound measurement.

AquaTrak’s piezocomposite transducers operate at 150 kHz enabling altitudes of 300m above the seabed. This operating frequency was selected as an ideal compromise between a deeper propagation of the acoustic pulses (due to the reduction in attenuation with decreasing frequency) while avoiding background noise at lower frequencies. The acoustic power requirements have also been minimized for UUV integration and operation — particularly for autonomous underwater vehicles.

To ensure that the incoming signals used within the correlation calculation result from bottom reflection rather than volume reverberation or background noise, AquaTrak uses advanced Synthetic Aperture Sonar acoustic correlation signal processing techniques. It first determines the height of the instrument above the seabed and uses time of flight calculations to neglect signals detected before this depth threshold.

The unit can therefore operate as an altimeter to verify other onboard instrumentation. The transmitted power is then automatically adjusted to take into account the attenuation of the returns from the seabed caused by transmission and absorption losses by the seafloor. The complex form of the correlation coefficient between two complex acoustic signals is then used by AquaTrak to generate velocity measurements.

The breakthrough in Kraken`s AquaTrak™ CVL was understanding how to use the SAS transducer arrays as a CVL in order to estimate with sufficiently high accuracy the three-dimensional velocity vector, giving the displacement between successive pings. The side-by-side comparison (shown below) of the forward ground speed given by a 300 kHz SAS used as a CVL and a conventional 600kHz DVL shows the much greater accuracy achieved by the CVL, which provides the evidence of the high potential of CVL technology.

Karl Kenny, Kraken’s President and CEO said, “AquaTrak is the outcome of a three year product development effort to design and build next generation velocity sensors for underwater navigation. AquaTrak has been developed using a combination of computer modelling, simulation and a comprehensive sea trials program. While DVLs have traditionally been the instrument of choice for interfacing with AUV navigation systems, we expect that to change in the very near future. The worldwide acoustic velocity sensor market represents an annual multi-million dollar revenue opportunity for Kraken.”