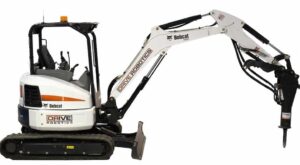 DriveRobotics is an add-on applique kit that enables building demolition and roadside construction companies to convert to unmanned operations whenever operators face hazardous situations. It can also be installed in both new vehicles and existing fleets.

“Our system removes the operator from the danger of falling debris, dust and the constant hammer vibration encountered during building demolition,” said Dan Deguire, director of engineering and product development for QinetiQ North America’s Unmanned Systems. “DriveRobotics eliminates the need for a spotter, which lowers cost and increases safety at roadside construction sites.”

“Having remote-control capabilities enables our customers to use machines in applications that aren’t otherwise possible, or that become easier without utilizing an operator,” said Laura Ness Owens of Bobcat Company. “Joint development of this system has been a good partnership.”

The first DriveRobotics system is shown on a Bobcat E35 and is being displayed at World of Concrete at the Las Vegas Convention Center.