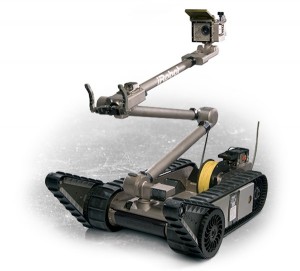 iRobot Corp., a leader in delivering robotic technology-based solutions, has been awarded multi-year contracts with an initial value of $9.6 million by the Canadian Department of National Defence (DND). The contracts, awarded after a competitive bidding process, call for the delivery of 20 iRobot 510 PackBot CBRN Recce Systems, training and future product lifecycle support. All systems under the contract are expected to be delivered by April 2015.

The iRobot 510 PackBot CBRN Recce System is a modular expansion to the company’s 510 PackBot Multi-Mission robot platform that meets specific requirements set forth by the Canadian DND. It includes a CBRN suite that integrates five primary sensors to reliably detect, alert and report on chemical warfare agents, toxic industrial chemicals, volatile gases, explosives and radiation. The robot also features enhanced mobility through the addition of rear flippers. It was chosen due in part to its ease of use, superior mobility, ability to access confined spaces and broad sensing capabilities.

“iRobot is honored to be working with the Canadian DND to meet the challenge of keeping personnel safe when responding to CBRN threats,” said Frank Wilson , senior vice president and general manager of iRobot’s Defense & Security business unit. “CBRN events occur globally, and each present their own unique challenges. iRobot offers all of our customers rugged, reliable and expandable systems that are capable of addressing a wide range of specific mission needs.”

While the 510 PackBot CBRN Recce System meets specific Canadian DND requirements, the base 510 PackBot Multi-Mission platform is able to integrate additional sensors to assist with the identification and interrogation of CBRN threats. The robot is also ideal for missions including explosive ordnance disposal, reconnaissance, route clearance and data collection in industrial settings.