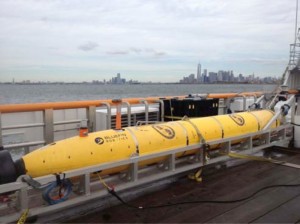 Navigating from the waters of Boston Harbor, the 20 foot long, 1,350 pound, ‘heavyweight’ AUV traveled south past Cape Cod, headed west through Nantucket Sound between Martha’s Vineyard and the mainland, and then continued south of Long Island to the approaches to New York City. The fully autonomous endurance mission was designed to push the boundaries of traditional AUVs with the objective to uncover the challenges and requirements for significantly extending AUV endurance for new applications.

To optimize for endurance and range, the vehicle traveled at a depth of 10 meters and an average speed of 2.5 knots through busy waterways and strong currents. The vehicle surfaced at 20-kilometer intervals to report position via Iridium satellite and made Upper New York Bay with a 10 percent energy reserve crediting a new high capacity energy section.

This exercise is the first of several planned missions that will incrementally increase autonomy complexity and endurance over the life of NRL’s research program and in overall AUV-based technology for the Navy.

Houston and his team are developing AUV based technologies that include extension of the Knifefish technology (as part of the Office of Naval Research Future Naval Capabilities program), increasing ranges for mine countermeasure (MCM) operations, and advancing autonomy for AUVs. Houston’s team is also applying this new technology to shallow water Anti-Submarine Warfare (ASW). This more recent development provides the Navy with the technical foundation for high performance detection and classification of difficult ASW targets using active sonar on AUVs in challenging environments.

The purpose of the system is to address the Navy’s need to reliably detect and identify undersea volume and bottom mines in high-clutter environments with low false alarm rates. The Knifefish system is a part of the Littoral Combat Ship (LCS) mine countermeasure (MCM) mission package targeted to reduce risks to personnel by operating in potential minefield regions as an off-board sensor, allowing host ships to remain at safe distances outside minefield boundaries.