Clearpath Robotics is in the running for the 2013 People’s Choice Stevie® Awards for Favorite Companies; a feature in the International Business Awards, which are now in their 10th year. The general public worldwide will vote for their favorite companies until September 18 at http://favoritecompanies.stevieawards.com/default.cfm. To vote for Clearpath Robotics, enter code Y216B or select the category ‘Industrial’. 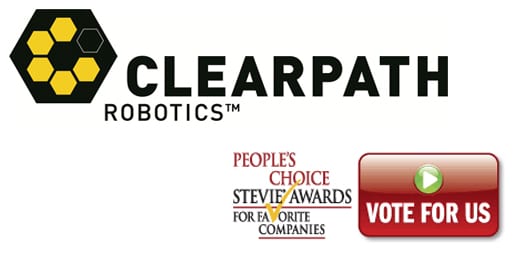 “This is an incredible recognition for our company and our efforts in product innovation to automate the world’s dullest, deadliest and dirtiest jobs with robots. Robots are going mainstream and this nomination is proof!” said Matt Rendall, Chief Executive Officer at Clearpath Robotics.

Clearpath’s Grizzly Robotic Utility Vehicle was announced the Gold Stevie Award winner in the International Business Awards last month for ‘Best New Product or Service of the Year – Industrial Products & Services’. The win has qualified Clearpath Robotics for the 2013 People’s Choice Stevie Awards for Favorite Companies; in addition, it has brought recognition to Clearpath’s ability to develop state-of-the-art, leading edge robotic vehicles. Grizzly, for instance, is the first of its kind to fuse robotic automation and utility vehicles. Any traditional utility vehicle implement can be attached to Grizzly RUV, making this robot adoptable by mainstream users.

Clearpath Robotics designs and builds unmanned vehicle robotics for research and development. The Company was founded in 2009 and has grown into a multi-million dollar company since, with customers in academic, environmental, industrial, and agricultural industries. World leaders utilize Clearpath’s platforms and services for leading edge research initiatives. Initiatives have spanned from next-generation Mars Rover prototypes to autonomous mining vehicles in harsh environments.