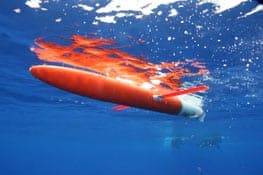 AUV Gliders have been deployed off the East Coast

A fleet of underwater robots is descending into waters off the east coast to collect data that could help improve storm intensity forecasts during future hurricane seasons. Several regions of the NOAA-led U.S. Integrated Ocean Observing System (IOOS®) are partnering to deploy 12 to 16 autonomous underwater robotic vehicles, also known as gliders, from Nova Scotia to Georgia.

The gliders will be available through the peak fall Atlantic storm season to collect data on ocean conditions, which will help improve scientists’ understanding of hurricanes and pave the way for future improvements in hurricane intensity forecasts.

“When storms are moving along our coasts, lives depend on accurate forecasts,” said Zdenka Willis, U.S. IOOS program director. “The unmanned gliders will allow us to collect data even in the middle of the storm and eventually provide this information to NOAA’s National Weather Service to help improve forecast precision so decision makers can keep people safe.”

Scientists will deploy the first gliders in the fleet in early September and continue deploying from different locations throughout the next two to three weeks. Each glider will be deployed for three to eight weeks, collecting data into October.

The underwater gliders can travel thousands of miles and continuously collect and send back ocean data. They can operate for several months at a time and can dive repeatedly to collect three-dimensional ocean observations.

Rutgers University is leading this combined science mission involving all three of the east coast IOOS regions: Northeast, Mid-Atlantic and Southeast. In addition to glider data, the mission will use satellite, moored buoy and coastal radar data. During the mission, the gliders will also collect acoustic data about fish and mammal migrations to improve the understanding of their behaviors.

Collected glider data will go through NOAA’s National Data Buoy Center to NOAA’s National Weather Service, the U.S. Navy and other data users for modeling. Data from the glider missions will also be public and available on the IOOS Glider Asset Map and at http://www.ndbc.noaa.gov/gliders.php

In addition to NOAA funding, provided through the IOOS regions, other funding sources for the project include the Office of Naval Research, the Environmental Protection Agency, NASA, a private donor from the University of Delaware, and Canada’s Ocean Technology Network.

IOOS is a federal, regional and private sector partnership working to enhance the ability to collect, deliver and use ocean information. IOOS delivers the data and information needed to increase understanding of our ocean and coasts so that decision makers can act to improve safety, enhance the economy, and protect the environment.